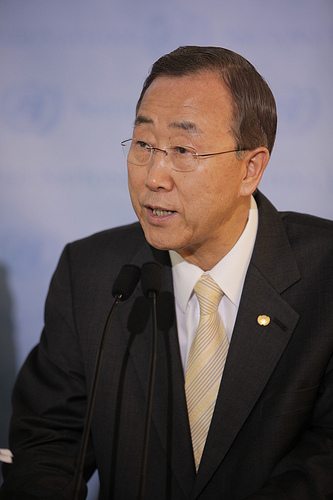 UN Secretary General Ban Ki-Moon has said that civil society movements are vital to reaching fair and sustainable climate targets at the Paris conference in December.

Ban Ki-Moon said that governments should invest wisely in low-carbon technology if world leaders are to work together to avoid the disastrous consequences of climate change.

He praised efforts that have led to an acceleration in low-carbon and clean technologies, but warned that the effects of climate change were striking faster than previously thought.

In an interview with the Guardian, Ban called climate change the “defining issue of our time” and said that it had been a top priority of his since taking over the role of Secretary General in 2007.

He said, “I have been urging all sectors of society to choose wisely and invest in the low carbon pathway.”

“Over the next 15 years, the world will make a massive investment in new infrastructures, in serious renewable energy. We can invest in the low carbon economy or we can invest in dirty technologies.”

He agreed with comments from Pope Francis that climate change, global poverty and promoting human dignity through governmental policy are all interlinked.

Ban also confirmed that the Pope would address a UN conference in New York in September, saying that he was “looking forward to the Pope’s encyclical on the subject, which would add some moral voice on this issue.”

A recent report by the World Resources Institute suggested that additional contributions were needed from the private sector to meet the $100bn target set at a climate summit in Copenhagen in 2009. These targets are necessary to mitigate the effects of climate change of developing and poorer countries.

Business leaders have also recently stepped up measures to tackle climate change, pledging to pull their support for fossil fuels and investing more in clean technology.

Last month, 120 business investors with a combined worth of $12trn called for action to avoid any unnecessary delay in tackling climate change. In a letter to G7 ministers ahead of December’s conference, they said that any delay would require “stringent” measures in the future.

The letter said that neglecting to act now would only increase the need to act later.

It said, “Delaying action will require more stringent policies later if we are to remain within the 2°C emissions budget, exacerbating risks associated with energy investments and potentially stranding assets.”

“A low carbon future is an imperative. Delaying strong policy on climate change would be a false economy.”

Last week, French insurance company Axa announced that it would be divesting from fossil fuels and tripling its investment holdings in green technology.

Henri de Castries, chief executive of Axa said that the decision was taken as a strategic measure to avoid carbon risk. He said that it was the responsibility of business to “consider carbon as a risk and to accompany the global energy transition.”

Other investors, such as the Church of England, a number of Universities and Danish pension savers have divested from fossil fuels, citing carbon risk as the driving factor behind their decisions.

The Paris climate conference will take place in December and will see world leaders come together to agree on global measures to avert the effects of climate change.