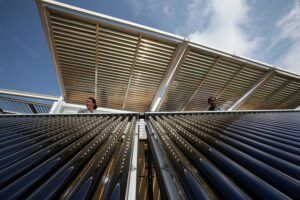 The Countdown Is On For Solar Energy

Over the coming years, the role of renewable energy, for example sun and wind energy, is predicted to rapidly increase.

At this stage it is hard to pinpoint exactly which companies will benefit the most, but it is already clear that a lot of damage will be caused in the energy sector, utilities and car manufacturers.

Less than 5% of our energy is produced by sun and wind. But this is changing rapidly. Since 2000, solar energy’s weight in the energy mix has doubled seven times. For wind power there have been four doublings, increasing the wind contribution to 3% of the energy mix in 2015. This exponential growth can be fully explained by the continuous price declines and the improved efficiency of solar panels and wind turbines.

We have left the first phase of renewable subsidies and goodwill behind us. We have already reached the next phase in which plain economics take over, as in windy or sunny areas it is already cheaper to produce unsubsidised solar or wind energy than burning coal or gas. Solar panel costs declined from roughly USD 100 in the 1970s to USD 0.60 today for a single-watt solar panel. Since 2005, the decline in solar panel prices has coincided with stellar growth in installed capacity.

Wind power prices have also declined on a remarkably steep path in the last decades, albeit less steep than solar power. Contrary to solar, wind power is an ancient old mechanical technology. Due to major efficiency enhancements in wind turbines, such as size and new locations at sea, the price of wind power still declined. In fact, offshore wind mills are able to generate 100X more power versus 30 years ago. This has made wind power prices decline by roughly 40% over the last five years. In comparison, solar power has declined by roughly 75% over the same period.

Most experts predict a continuation of the price declines in both solar and wind power, although at slower rates than in the recent past. Bloomberg New Energy Finance predicts that these two technologies will become the cheapest ways of producing electricity in many countries during the 2020s and in most of the world in the 2030s. They see onshore wind costs falling by 41% and solar photovoltaic (PV) costs falling by 60% by 2040. Also Deutsche Bank, CLSA and Tony Sheba from Stanford University predict the price decline in solar to continue. Goldman Sachs expect that between 2015 and 2020 wind and solar will add more energy supply than US shale did between 2010 and 2015.

Deutsche Bank expects that in 2016 it will be cheaper to produce solar energy than fossil based electricity in 47 states of the US. In 2017 this will be the case in 80% of the world. Bloomberg New Energy Finance sees 2025 as the turning point. From 2025 onwards Bloomberg expects all of the growth in the energy market to come from solar and wind energy. From here onwards they see solar power growing sixfold to become the cheapest energy resource. UBS Investment bank is even more optimistic and expects wind and solar to be the cheapest power generation technologies across the world by 2020.

The 2015 United Nations Climate Change Conference, COP 21 or CMP 11, was the first climate conference after Kyoto 1997 where an agreement was reached between all participating 196 countries. According to COP21, all countries need to pursue all possible efforts to limit global warming to less than 2 °C compared with pre-industrial levels. The agreement calls for zero net greenhouse gas emissions to be reached during the second half of this century. Although the positive mindset is there, COP21 still needs be ratified by local parliaments. Although this seems trivial, this is something where the Kyoto agreement went wrong as the US simply never ratified and Canada withdrew from the protocol. However, hopes are high as in September 2016 both China and the US officially ratified

It is clear that the fight against emissions has become a global one after COP21. The number of national laws or regulations to reduce emissions and stimulate renewables has increased steadily over the last decade. It is expected that this will continue thanks to COP21.

Another advantage of solar energy is that it is truly abundant and only a limited amount of the surface of the earth is required to fully supply our world with solar energy. Both solar and wind energy have almost zero marginal costs and this changes the game for power production. It just takes more sunlight and or more wind to produce an additional unit of power. Due to these zero marginal costs, the total costs of electricity will go down the more renewable energy is used in the energy mix. Interestingly enough, the lower the cost of electricity the lower the costs of solar panels, as one of the biggest input costs for producing solar panels is electricity.

These zero marginal costs change the game on the energy markets in many ways. The German grid, for instance, has a hard time handling zero marginal costs as shown by all those sunny days where German electricity had negative wholesale prices. Negative pricing makes cheap energy storage the holy grail of renewable energy. The grail will soon be found in the combination of much cheaper batteries and new stationary storage technologies.

These cheaper and better batteries will also lead to the breakthrough of electric vehicles (EVs). Next to cheaper driving, EVs might as well become the ultimate storage for the cheap solar and wind energy we are going to harvest in the next decade.

Cheap solar energy combined with cheap batteries could cause a lot of damage among companies in the energy sector, utilities and car manufacturers. Spotting future winners is much harder in such a highly deflationary environment. The most obvious winners are of course mankind and our planet Earth.