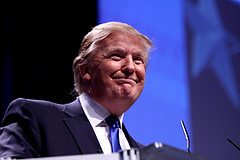 A legal bid by Donald Trump to halt the construction of a wind farm off the coast of his luxury Aberdeenshire golf course has been rejected by a Scottish judge.

The appeal was launched by the US billionaire tycoon, a fierce wind power critic, back in December. The development of the £230m European Offshore Wind Development Centre (EOWDC) was shelved pending the outcome of the hearing.

Trump complained that the construction would ruin the view from his luxury golf course in Blackdog, near Aberdeen, after Scottish ministers gave the project the go-ahead.

The case’s presiding judge, Lord Doherty, supported the decision in court on Tuesday, saying that it had been in no way biased. He added that a public inquiry or consultation was not necessary under Scottish law.

The decision was welcomed by campaigners, who said that the ruling was “good news” for all those interested in cutting emissions and creating jobs in Scotland.

WWF Scotland director Lang Banks said, “It’s good to know that despite all his bluster, the courts saw right through Trump’s flimsy, misguided attempts to frustrate Scotland’s ambition to create clean power and green jobs. We hope Mr Trump will now stop wasting any more time and money on this case.”

He added, “Scotland is home to a quarter of Europe’s offshore wind resource. Studies estimate that Scotland’s offshore wind industry could create 28,000 jobs by 2020 and contribute over £7 billion of investment to the economy.”

Trump has been a vocal opponent to wind power in Scotland, writing an open letter on the issue to Scottish first minister Alex Salmond and accusing the Scottish government of committing “financial suicide” by pressing ahead with the technology.

Salmond responded to Trump by saying that the Scottish government would support technologies that would encourage a “renewable revolution”.

In a statement on Tuesday after Trump’s complaint was rejected, the Trump Organisation said it would be reviewing Lord Doherty’s decision.

“Today’s decision has not altered our unwavering commitment to protect our investment in Scotland. We are reviewing Lord Doherty’s decision and will pursue the legal options available to us as recommended by our counsel”, it said.

“Communities worldwide continue to challenge the destructive proliferation of wind turbines and we will remain a fierce opponent at the forefront of this battle.

“Despite today’s decision, the EOWDC proposal has numerous economic and legal obstacles that will ultimately prevent its construction.”