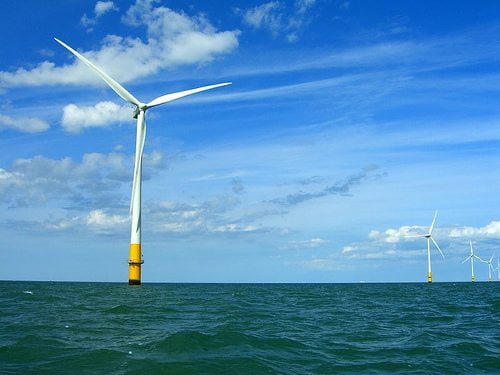 The UK government has approved plans for what may become the largest offshore wind farm in the world, a 240-turbine project off the coast of Suffolk.

The project, a joint venture from ScottishPower Renewables and Vattenfall, would generate enough electricity to power around 820,000 homes. It is also anticipated to create 2,900 jobs and bring in over £520m of investment.

Dubbed East Anglia One, the wind farm would sit 27 miles (43km) offshore. Construction is now expected to begin in 2017.

“East Anglia and the rest of the UK have a lot to gain from this development”, said energy and climate change secretary Ed Davey.

“Making the most of Britain’s home grown energy is crucial in creating job and business opportunities, getting the best deal for customers and reducing our reliance on foreign imports.”

The London Array, which sits 12 miles off the coast of Kent, is currently the largest wind farm in the world. The Array has 175 turbines, and plans for an expansion that would have seen a further 166 turbines installed were rejected in February, meaning East Anglia One would far surpass its capacity.

Environmental campaigners have praised the decision to approve the project, calling it “a strong vote of confidence for the UK’s offshore wind sector”.

“Climate change is the biggest threat facing our oceans and seas globally and is already impacting on the UK’s rich marine environment. It’s therefore vital that we find ways to harness the clean energy that marine renewables, such as offshore wind, can provide,” said Ben Stafford, head of public affairs at WWF-UK.

The project is the first to be approved under the government’s round 3 of offshore wind farms, while eight more developers have plans in the pipeline.

However, some have criticised the government for not being even more ambitious.

“This is fantastic news for energy security, jobs and the battle to tackle climate change”, said Friends of the Earth’s head of campaigns Andrew Pendleton.

“It’s a shame however that the government continues to speak with a forked tongue on renewables.

“Simultaneously supporting and undermining the growing renewables industry, and having a meek ambition even for offshore wind, is no way to secure a clean supply of energy for the future.”

The government has recently announced alterations to the subsidy regime for solar farms, and the Conservative party has pledged to cut down on onshore wind projects if reelected. Such changes have been heavily criticised for increasing uncertainty for investors.