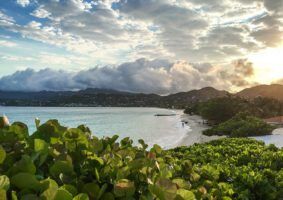 However great tourism might be for the island economies of the Caribbean, it is not nearly such good news for their environment. Tourism-generated jobs and infrastructure can come at the cost of previously untouched landscapes and natural habitats. Furthermore, each round of merry holidaymakers brings litter, air pollution and an increased strain on natural resources.

Over the last few years, Grenada’s economy has been on the rise, fuelled predominantly by agriculture and tourism. Unlike other Caribbean nations however, the balance between preserving and exploiting the environment is one that the country takes very seriously.

One of the most important factors in ensuring long-term economic stability in Grenada is its Citizenship by Investment Programme. Introduced in 2013, the programme allows foreign nationals to obtain citizenship through a contribution to a government fund or through an investment in real estate. The IMF predicts that the rate of investment in this programme will continue to rise, allowing Grenada’s economy to grow while remaining protected from external factors such as fluctuations in trade demand and changes in the cost of the country’s main exports.

The programme also plays a key role in preserving the environment. This is because Grenada promotes the Programme not only by highlighting the financial incentives the nation offers to investors, but also by drawing attention to Grenada’s natural lifestyle – and the many other benefits that come with citizenship. If Grenada is to ensure that its economy is kept afloat by citizenship by investment, protecting its environment must be a priority.

Harnessing sustainable power from all four of nature’s elements

A volcanic island in a tropical sea, Grenada has no shortage of options when it comes to generating renewable energy. However, due to the tourist industry’s reliance on these same resources, not all of these avenues can be realised.

It’s thought that ocean wave technology and offshore wind farms, for example, would cause more harm than good to the island. Tourism, marine wildlife, and fishing industries would all be compromised if these renewable energy structures were to appear along Grenada’s coastline.

That still leaves sun, sea breeze, and the volcanic land beneath Grenada’s stunning landscapes as potential energy sources. Since environmental efforts began in earnest in 2013, solar energy has been invested in the most. This unlimited resource, plentiful in the Caribbean, is becoming cheaper and easier to harness, especially as the price of importing and installing equipment in the island, such as solar panels, becomes reduced.

Lastly, Grenada is being encouraged to dig deep and evaluate the possibility of unlocking geothermal power. Volcanic islands across the Eastern Caribbean are under review by both Inter-American and Caribbean Development Banks to find out the extent to which each island has geothermal potential.

Local businesses are also making moves to prevent litter from becoming a problem earlier in the waste cycle – primarily by reducing the amount of disposable plastic they produce. Plastic cups and bags are replaced with paper alternatives, and bars are completely doing away with plastic straws.

These ‘clean environment’ efforts are focused on the sea just as much as they are on land. Marine and coastal litter prevention is going to be at the forefront of many clean-up projects in the coming years.

One of the trickiest challenges will be keeping the beaches clean for tourists and continuing to keep them clean once the tourists have arrived. Large numbers of tourists mean large amounts of waste, which will need to be tightly monitored by local conservation personnel.