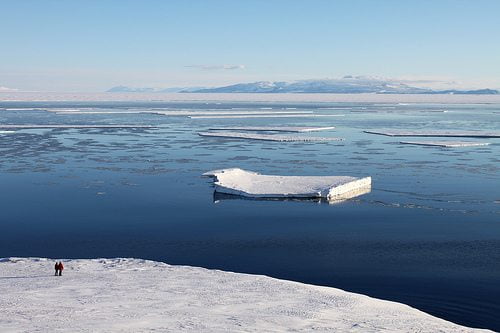 An ice shelf twice the size of Wales depleted by 4 metres between 1998 and 2012 and is at risk of collapse, according to a study by the British Antarctica Survey.

Larsen C, which is a long ice shelf in the northwest part of the Weddell Sea, is thinning due to warmer temperatures and warmer oceans. A study by the British Antarctica Survey (BAS) found that images taken between 1998 and 2012 showed that the sheet has lost 4 metres and was now “less stable”.

The study is published just a day after researchers found a glitch in satellite records that suggested sea level rise is accelerating faster than previously thought.

It is now believed that the Larsen C could collapse within a few decades, which would cause global sea levels to rise by a few centimetres. This individual study shows the effects that this one individual ice shelf could have on sea levels, but scientists recently warned that across the region, ice melting could cause levels to rise by metres in the future.

For years, researchers were unable to determine whether warmer oceans or warmer air temperatures were causing melting, but the new study found that Larsen C is thinning from both its surface and from beneath. This means that the cause of melting is both a combination of air and ocean temperatures.

“Air is being lost from the top layer of snow (called the firn), which is becoming more compacted — probably because of increased melting by a warmer atmosphere. We know also that Larsen C is losing ice, probably from warmer ocean currents or changing ice flow”.

He added, “If this vast ice shelf — which is over two and a half times the size of Wales and 10 times bigger than Larsen B — was to collapse, it would allow the tributary glaciers behind it to flow faster into the sea. This would then contribute to sea-level rise.”

The Antarctic Peninsula is one of the fastest warming regions on earth and has seen an increase of 2.5oC over the past 50 years.