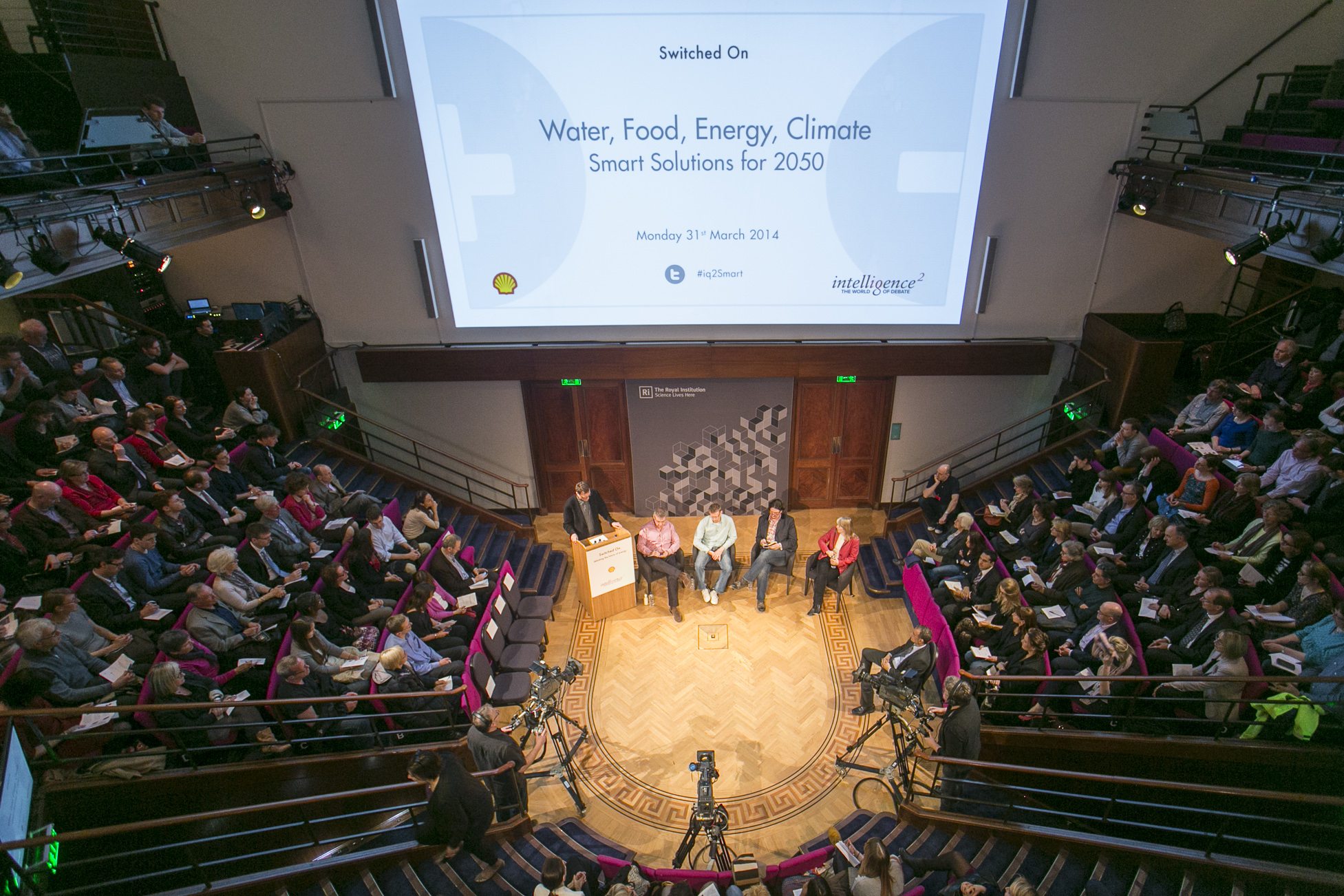 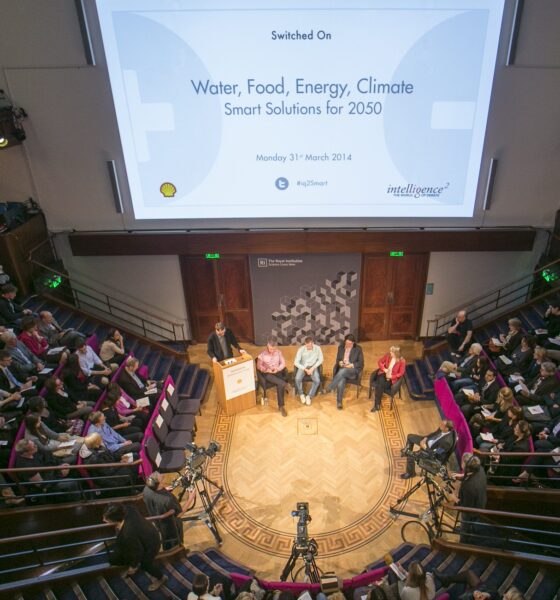 All things are connected. This sentiment, which goes right to the heart of sustainability, was the central theme at a recent Intelligence Squared event.

Water, Food, Energy, Climate: Smart Solutions for 2050 took place at the Royal Institution of Great Britain in London. Supported by oil giant Shell (I know – I’ll get to that later), it brought together four leading thinkers to discuss what the world needs to do to avert food riots, water wars and energy crises when its population hits the expected 9 billion mark in 2050.

Unlike most Intelligence Squared debates, which follow a standard for-and-against format, Monday’s event was described to me as a “panel with friction”. The four panellists, each with their own area of expertise, were likely to agree on some things and disagree on others.

Master of ceremonies was Matthew Taylor, chief executive of the Royal Society for the encouragement of Arts, Manufactures and Commerce (RSA). He opened by describing the interconnectedness of the event’s four themes – water, food, energy and climate – and the “stress nexus” that runs throughout them all.

The first panellist to deliver an opening speech was Gabrielle Walker, a writer and broadcaster specialising in energy and climate change. She echoed Taylor’s remarks, saying we shouldn’t be looking at any of the four areas individually. Her analogy was that of the children’s game whack-a-mole – saying that problems will continue popping up (like the moles) unless you tackle them as one.

Following Walker was Jay Rayner – the popular writer, journalist and broadcaster perhaps best known for being a judge on BBC1’s Masterchef and resident food expert on The One Show. Rayner opened by pointing out the irony in event sponsor Shell’s introductory video about food, water, energy and climate problems.

The oil giant’s involvement was a continued source of questioning from the audience all evening. The panel agreed that the fossil fuels it burns are to blame for climate change, but added that they were also responsible for much of human development. Walker went on to say later on that scientists, the media and politicians are not going to fix any of the world’s problems and that if big corporations don’t help, then we’re “completely screwed“.

After receiving support from many in the audience for his point about Shell, Rayner went on to speak specifically about food. He said the debate shouldn’t always be about food miles and where in the world food is grown; we should be talking about how we grow our food instead.

His latest book, A Greedy Man In A Hungry World: How (almost) everything you thought you knew about food is wrong, contains a chapter called ‘Supermarkets are not evil’ followed by another titled ‘Supermarkets are evil’. He explained that big supermarkets are not always bad, and often necessary, pointing out that without them, shopping would take so much longer (there’s nothing romantic about watching a man chop a lump of butter off a block, he said, or words to that effect).

Third to speak was Mark Lynas, the author and environmental campaigner on areas like climate change, biotechnology and nuclear power. He began by saying how the environmental movement had “demonised” genetically modified (GM) crops in the same way as it had nuclear power – yet both represent huge solutions to environmental problems.

Lynas has always been open about his shift in stance from anti-GM to pro-GM. He said that in his previous life working at an NGO, he realised that he was urging politicians and businesses to look at what the science tells us about climate change, but then not saying the same about GM crops. He added it was therefore important to debate facts – and not the myths spread by the anti-GM lobby.

Jeremy Woods, an expert in bioenergy and biorenewables from Imperial College London, was the final panellist to take to the floor. He explained that one of the main benefits of renewable energy was that it connects us with the environment – and none more so than biofuels. Answering a question from the audience, he described the choice between growing crops for fuel or food as a “false dichotomy”.

The event was then opened up to the audience. Those who asked particularly good questions were rewarded by Taylor with a stress ball (as in the ‘stress nexus’). He amusingly ended up handing them to the woman who asked the very first question, a man with a particularly difficult-to-pronounce name and another woman who asked whether humans will still be around in 1,000 years.

Asked about organic food, Rayner said such a tag doesn’t necessarily mean a product will be better for the environment. Woods noted the difficulty in reducing fossil fuel usage. If we want to mitigate climate change we have to make fossil fuels more expensive, he said, but if we do that, we’re harming the developing world. Meanwhile, Walker noted that the education of women was perhaps the most important tool in reducing population growth.

The debate was interesting and important. It may have benefitted from input from those not in the sustainability space, but there was enough difference of opinion among the four panellists to make it lively.

There are real and serious problems in water, food, energy and climate – and this event by no means had all the answers. But what it did was create vital discussion, which can only be useful.

That said, if some of the solutions on offer fail to live up to their expectation, Walker suggested a novel – if slightly disgusting – idea to solve both obesity and the fuel crisis: liposuction. She was given a stress ball for the weird suggestion. Let’s hope it doesn’t come to that.