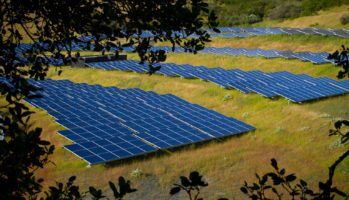 Bourne-based company Lark Energy (www.larkenergy.co.uk) are now creators of a new and unique project built to generate renewable power, whilst increasing the income for Swindon residents.

The Swindon Community solar farm in Wroughton was developed by Public Power Solutions (PPS), a company wholly owned by Swindon Borough Council. The solar farm was built on low grade farm land owned by the council.

Lark Energy was appointed to manage and build the solar farm. The company has an established track record for the construction of large-scale PV (photo-voltaic) installations and the associated infrastructure.

The Swindon solar farm has now been connected to the grid and can generate enough electricity to supply the equivalent of 1,200 typical homes and save around 2,000 tonnes of carbon dioxide a year. The site will be managed to promote biodiversity, with the land around the panels remaining in agricultural use as well as sheep grazing for part of the year.

Paul Adams, managing director of Lark Energy, said: “This is exactly the sort of project Lark Energy is keen to be involved in.

“We were able to offer our extensive experience and expertise in the construction of this large solar farm project, which will ultimately benefit the local community in a number of ways.”

The ethos of the Larkfleet Group, of which we are a part, is absolutely focused on sustainability to build the best possible solutions for local communities.

Uniquely, this project has been funded by a blend of public sector and community investment devised by PPS. The £4.8 million construction cost of the project was met by a £3 million investment from Swindon Borough Council and £1.8 million raised from direct investment from the public through ‘Council Solar Bonds’ which was structured by Abundance Investment.  In future, 65 per cent of the distributable profits from the solar farm will go towards funding local community initiatives, with the rest going to the council.

Lark Energy is involved in a number of large-scale solar farm projects throughout the UK.