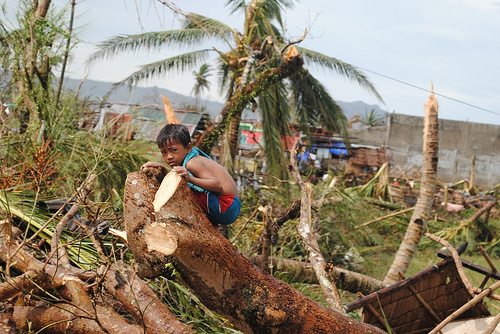 Amalie Obusan of Greenpeace watched on as her native Philippines was torn apart by the devastating Typhoon Haiyan last year. Here, she writes how her country is fighting back with clean energy.

It is impossible to forget the anxiety I felt for the safety of my family when supertyphoon Haiyan, possibly the most powerful ever to hit land, struck the Philippines with an unprecedented ferocity last November.

Leaving a path of destruction, Haiyan left 8,000 people dead or missing and devastated communities as millions of people lost their homes and livelihoods. Thousands of Filipinos are still grieving for the death of their loved ones.

It is a sadness I can share. My father-in-law died during Typhoon Conson in 2010 when a flash flood swept away his car as he was crossing a bridge on his way home. Fortunately, my family was luckier during Typhoon Haiyan and all survived. They were likewise spared during typhoons Washi and Bopha, which were in the area where they lived.

But in the wake of Haiyan, communities are struggling to recover and I remain fearful for the future of my beloved country. Typhoons are common in the Philippines, but it is fightening to think that the destructive power of typhoons will increase with global warming.

This is why I am in Japan this week on behalf of Greenpeace, attending a meeting of the Intergovernmental Panel on Climate Change (IPCC) as it prepares to deliver its latest, and perhaps most dire, assessment on the impacts of climate change.

Here at the IPCC meeting in Yokohama, the world’s leading climate scientists will say that the future is grim if governments fail to to take approriate action. I bring a message of urgency.

More than four months after Haiyan struck, a national survey revealed that 3.9m families have experienced involuntary hunger in the last quarter of 2013. Families are also going to extraordinary lengths to obtain clean water as safe drinking water is desperately scarce in the storm-ravaged portion of the central Philippines.

Yeb Sano, lead negotiator for the Philippines at the annual UN climate talks, also points out that more than 1m farming households and 20,000 fishing households are struggling to pick up the pieces. Overall, losses in the agriculture sector could come close to $1 billion (£600m).

This is today’s climate change reality. It is not something that will happen in some distant future or in some distant land. It is here and now and it is happening in my country.

Haiyan bequeathed the country with a need for the biggest reconstruction effort since the end of the second world war. It will cost more than $8 billion (£4.8 billion) in the next four years at least to rebuild homes, create jobs and businesses, health and education services and public infrastructure.

The power sector was one of the hardest hit, as 90% of the transmission towers and electricity poles were either toppled or broken in the disaster region. Eight provinces were left without power for days, which has turned into weeks and months.

Crucial decisions now need to be made for the reconstruction of the energy systems essential to the delivery of goods and services in the devastated provinces. This is an opportunity to establish sustainable, climate-resilient communities using decentralised renewable energy systems.

In contrast to the vulnerability of centralised energy infrastructure, solar photovoltaic panels can make a huge difference to disaster-hit areas.

Life for Haiyan survivors was improved by emergency solar power, bringing a continued and affordable source of electricity and making disaster response and co-ordination much easier while centralised power lines are still down. Scaleable solar energy systems can also provide more resilience towards future climate hazards.

This is the opportunity being taken by my country. Communities affected by Haiyan are involved in the reconstruction efforts in the spirit of bayanihan, a term that refers to a spirit of communal unity or effort to achieve a particular objective.

Here in Yokohama, the IPCC will say that some climate impacts are already unavoidable. This means we must adapt and utilise energies that are more resilient to disruptions and that meet the needs of the vulnerable in an affordable way. That is the power of decentralised renewable energy.

We can choose to embrace solutions such as renewable energy and energy efficiency to avert climate chaos. This choice is our best shot at making the world a safer, cleaner, more sustainable place and to help build our resilience to face climate change.

We in the Philippines are not just waiting. Civil society has for many years campaigned for clean energy and today the country already meets close to 30% of its energy needs with renewable energy.

It’s now time to head towards a world powered 100% by renewable energy. My family, your future and our communities depend on it.

Amalie Obusan is the regional climate and energy campaigner for Greenpeace South-East Asia. She can be contacted at amalie.obusan@greenpeace.org.