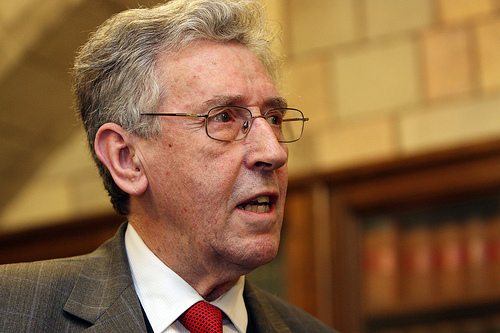 Former energy secretary Lord Howell has said there is “plenty of room” for shale gas drilling in “uninhabited and desolate” parts of the north-east of England.

Speaking in the House of Lords on Tuesday, he added it was a “mistake” to discuss fracking in terms of the whole of the UK, and that the north-east represents an ideal location for shale gas exploration.

Green campaigners have criticised his views, with Friends of the Earth describing them as “jaw-dropping”.

Lord Howell, who is the father-in-law of the chancellor George Osborne, was energy secretary under Margaret Thatcher between 1979 and 1981. He was a minister in the foreign office until as recently as 2012.

In a brief statement about fracking to fellow peers, he said, “There obviously are, in beautiful rural areas, worries not just so much about the drilling and the fracking, which I think are exaggerated, but about the trucks and the delivery and the roads and the disturbance, and those are quite justified worries.

“But there are large and uninhabited and desolate areas, certainly up in part of the north-east, where there’s plenty of room for fracking – well away from anybody’s residence where it would be conducted without any kind of threat to the rural environment.”

Turning to energy minister Lady Verma, the Conservative peer added, “So would you agree that a distinction should be made between one area and another, rather than lumping them all together? And if we can push ahead with this kind of gas production, then obviously it takes us fast away from the kind of coal burning, which is increasing at the moment because of delays in authorising gas production.”

Reacting to Lord Howell’s comments, Friends of the Earth energy campaigner Tony Bosworth said, “The government’s ill-conceived fracking plans aren’t something that can be quietly brushed under the carpet ‘up north’ – as the villages resisting the drillers in the Tory heartlands of England’s south show.

“It’s time to pull the plug on the UK’s dirty fossil fuel addiction and develop clean energy that won’t cost people all over England their green and pleasant land.”

A number of people were arrested in Sussex on Friday, while staging a protest against fracking firm Cuadrilla, which had begun ‘exploratory’ drilling for shale gas at the site.