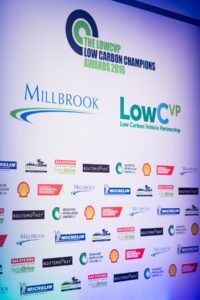 Last night the 2016 Low Carbon Champions were announced by The Low Carbon Vehicle Partnership (LowCVP) during the industry’s leading networking dinner in assocaiation with LCV2016. The champions Awards shine a light on achievements and innovation in the move to low carbon road transport.

Sir Peter Hendy was recognised as the 2016 winner of the Outstanding Individual in Promoting Low Carbon Transport at the celebration. Hosted by Formula E TV presenter and science communicator, Nicki Shields, who was Master of Ceremonies, the event took place at the Double Tree by Hilton, MK Dons Stadium.

The LowCVP Managing Director Andy Eastlake said about the Awards:

“All the entries short-listed for the Champions Awards deserve recognition for the contribution they are making to cutting carbon emissions from road transport.

“There is a lot of work still to be done to achieve the long-term objectives set under the Climate Change Act, but the dynamism and determination shown by so many of those involved today shows how UK industry and operators have the drive and potential to achieve them.”

The judges said that Toyota – which won the car manufacturer award – has been a global leader in low emission vehicles, selling over 9 million petrol hybrids. They said that the company has built on this reputation with the introduction of the zero emission hydrogen fuel cell car, Mirai.

The Aberdeen Hydrogen Bus Project – H2 Aberdeen – has introduced Europe’s largest fleet of hydrogen fuel cell buses. The project has delivered the UK’s largest hydrogen production and bus refuelling station. The bus companies report that the vehicles are proving to be extremely efficient compared to their diesel equivalents.

Argent Energy manufactures 60 million litres of biodiesel from waste each year. In 2015 Argent supplied high bio‐blend diesel to two major London bus companies. After a year of supplying these companies, the greenhouse gas emission savings will be equivalent to 150 million miles of carbon-free travel, based on DfT figures.

The Champions Awards judging panel was comprised of 22 senior executives from across a range of UK organisations with a stake in the low carbon road transport agenda.

Richard Bruce, Director Energy, Technology and Innovation at the Department for Transport – one of the Awards judges – said: “It’s fantastic to see another array of ground-breaking companies vying for the Low Carbon Champions Awards this year. It’s precisely because of the synergies between environmental improvement and great commercial opportunity – synergies that the ideas and technologies here demonstrate so well – that the UK Government remains so committed to this agenda.”

“It’s encouraging to see so many UK-based organisations committed to cutting carbon emissions and improve air quality. We are pleased to present this award to two fantastic companies, and commend them for their continued good work.

“As an organisation committed to the test, validation and engineering of low carbon transport, Millbrook is proud to present the ‘Grand Prix’ award jointly to H2 Aberdeen and Argent Energy.”

Darren Messem, Chairman of the LowCVP and an Awards Judge said:

“The UK vehicle industry continues to push the boundaries of innovation in low carbon technology, production and operation. This is essential to deliver the decarbonisation of transport needed to mitigate the worst effects of climate change and to improve air quality.

“This year’s LowCVP Champions Awards recognise innovation across the transport sector, and all stakeholders in the LowCVP – the Board, the Secretariat and our members – hope this provides further stimulus to all the innovators and operators working hard to deliver low carbon transport.”

Another of the judges, Professor Neville Jackson, Chief Technology and Innovation Officer at Ricardo UK Ltd, said: “The LowCVP Champions Awards have now been established as a key event in the Automotive technology calendar.

“Both the LowCVP and their awards have played an important part in transforming the low carbon transport sector to provide a dynamic and successful contribution to UK innovation. This has resulted in an expansion of the low carbon agenda, from a few niche vehicles and initiatives to mainstream automotive in recent years.”

“Robert Evans, Chief Executive of Cenex, the organiser of LCV2016, said: “We are pleased to be able to host the LowCVP Low Carbon Champion Awards as part of the Cenex-LCV2016 networking dinner.

“The LCV2016 event brings the low carbon vehicle community together for two days of technology showcasing and networking, with the evening dinner extending this valuable networking time. As an awards judge I commend all those nominated for an Award and congratulate the winners.”