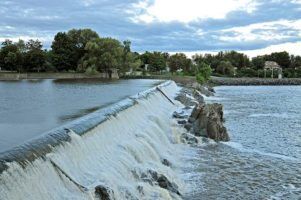 Today’s official launch of the MeyGen tidal stream project in Scotland, the largest of its kind worldwide, is an important advance in the development of marine energy, according to RenewableUK.

One of the world’s largest tidal turbines, 15 metres tall, with blades 16 metres in diameter, and weighing almost 200 tonnes, is being unveiled (12 noon) at Nigg Energy Park near Inverness, where it was assembled on the site of a former oil and gas fabrication yard.

After the ceremony, it will begin its journey to the MeyGen project site in the Pentland Firth, off the north coast of Scotland between Caithness and Orkney.

“Our country is the global leader in marine energy. The MeyGen project is a major step forward in terms of scale, giving us a great boost in maintaining Britain’s pole position. The fact that the first turbine was assembled at what was an oil and gas fabrication yard illustrates the opportunities offered by renewables. New technology like this will be powering our nation for decades to come.

Our country is the global leader in marine energy.

“The official launch of the largest tidal stream energy project in the world marks a significant moment in the commercial development of marine power. It clearly demonstrates the economic opportunities being created in the UK, which other countries are eyeing enviously – Britain is driving innovation, attracting investment and creating jobs”.

The turbine is the first of four to be installed underwater, each with a capacity of 1.5 megawatts (MW), in the initial phase of the project. In total, the developer, Edinburgh-based Atlantis Resources, intends to install up to 269 turbines, bringing the project’s capacity to 398MW – enough to power 175,000 homes. First power will be delivered to the grid later this year.

“The MeyGen farm is an important pathfinder for the sector and will further prove the viability of tidal energy as an investment opportunity. In the coming years, success at MeyGen and other pioneering projects will open up tidal energy markets around the world, just like we’ve seen happen with wind and solar energy”, said Rémi Gruet, at the launch ceremony in Inverness.

Europe currently is the global technology leader in tidal energy, and is well positioned to dominate this emerging market domestically and abroad.  The EU and European governments must continue to support the sector by putting in place clear and stable support frameworks, facilitating investments and leveraging private finance”, continued Rémi Gruet, CEO of Ocean Energy Europe.