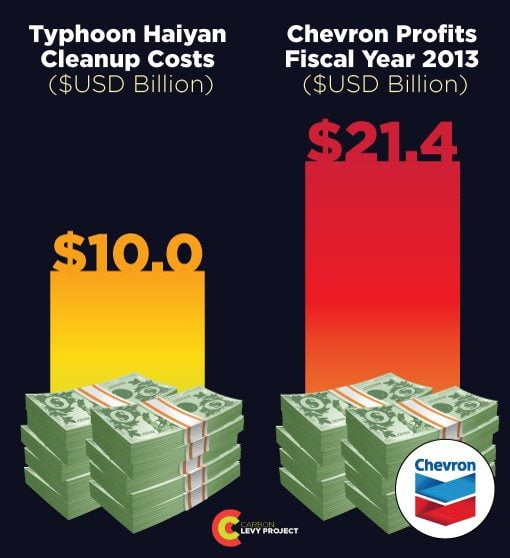 Making a killing: who pays the real costs of big oil, coal and gas?

As the death toll rises after the Philippines’ 12th typhoon this year, a new report questions the world’s biggest fossil fuel companies making billions in profits without paying for any of the climate damage their product is causing.

Loss and damage – the worst impacts of climate change that go beyond what people can adapt to – is a crunch issue in the lead up to the Paris climate summit.

“Developed countries object to loss and damage forming part of the core Paris agreement – yet for vulnerable countries it is an existential issue and its inclusion is essential,” said Julie Anne Richards of the Carbon Levy Project.

One reason developed countries object to including Loss and Damage in the Paris Agreement is because they don’t want to pay for it.  The Carbon Levy offers a new source of finance – a levy on the extraction of fossil fuels – direct from the entities who caused the problem, and may help to overcome developed country concerns.

“Our report raises the question:  why should big oil, coal and gas continue to make outrageous profits and outsource the true cost of their product upon the poor who are paying with their lives?” said Julie Anne Richards.

The Carbon Levy Project has analysed three climate-related events that have led to actual loss and damage, and compare those costs with the profits of some of the 90 “Carbon Majors” who are responsible for more than two thirds of the man-made greenhouse gas emissions in the atmosphere today.

In November 2013, the deadly Typhoon Haiyan (Yolanda) blasted the Philippines, killing more than 7300 people and forcing four million from their homes. The damage was estimated to be around $10 billion. Chevron’s profits in 2013 were $21.4 billion.

In Kenya a four-year drought has decimated crops. At its peak it left 13.3 million people with food shortages and led to a large number of deaths. Government of Kenya estimated losses of $12.1 billion.   Over the same period Shell made profits of $90.2 billion.

In Papua New Guinea, the Government has started a programme of relocating the 6000 inhabitants of the Carteret Islands to other parts of the country, as the Cartaret Islands are suffering from the effects of sea level rise and increased salinity.  While the Carteret Islands needs USD $5.3 million to relocate, ExxonMobil recorded USD $32.5 billion in profits in 2014 alone.