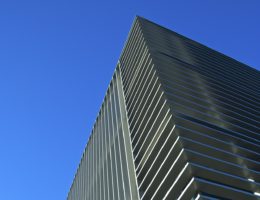 Is Net-Zero Building Realistic on a Large Scale?

Exploding global population numbers and worries about escalating energy prices, climate change, and energy independence have shifted many experts’ focus on a major source of our power drains – buildings.  In fact, statistics from the U.S. Department of Energy show that our nation’s buildings are our primary energy consumer.  By looking at ways to decrease energy consumption through design, construction, and operation of buildings, this major sector can significantly reduce energy use.  The most efficient way to do this is through a concept known as Net Zero Energy Building (NZEB), which is gaining attention and momentum worldwide.

What is Net-Zero Energy Building?

Net Zero refers to a “zero energy” or “net zero energy” building in which a structure produces as much energy as it consumes annually.  The standards as to what constitutes a NZEB in the U.S. were developed by the Department of Energy and the National Renewable Energy Laboratory (NREL). The NREL published a guide that explores these definitions in detail and suggests that projects can reach net zero through several metrics that include site energy, energy costs, source energy, and energy emissions.

While some net-zero homes have been a reality for several years, it’s the commercial projects and communities that are getting the most attention as they will have a profound impact over time.   The nation’s largest net-zero commercial building is located in Greater Los Angeles and was dedicated in June 2016.   This 144,000 square-foot building will serve as both a living laboratory and demonstration center to showcase energy-efficient design techniques and clean energy technologies.

A net-zero community called New Rainier Vista was just completed in Seattle, WA that consists of 42 sustainable, green homes.  The homes are arranged in clusters of four that sit around a central garden.  Each rooftop is prepared for the installation of solar panels, has triple-glazed windows, and double-framed walls.  Many of the materials used are recycled, and the units also have tankless water heaters.

The Net-Zero Cities of the Future

Now that we know how to construct net-zero buildings, the next move is towards entire towns and cities.  Perhaps a lofty goal but some communities are well on their way towards its achievement.  Sacramento, CA currently has the most net-zero buildings of any city in the country.  Despite this, the California state capital would have a long way to travel to reach total net-zero status as a city.  However, the small community of Cambridge, MA is working on total net-zero zoning as a city.  This is a long-term project that calls for a 70 percent reduction in building emissions by 2040.

Despite the benefits, building a net-zero building or community isn’t cheap.  In fact, economic constraints led Masdar in Abu Dhabi to scale back some of its net-zero ambitions.  However, advances in technology are making some of these ultra-efficient systems more attainable, and this will help with future net-zero building projects.   The cost of the systems isn’t the only barrier to the communities, but also the complexity of their designs.  Most net-zero projects are beyond the realm of the expertise of a single architect with an auto-CAD program.  Rather, these projects require massive levels of collaboration between designers, engineers, and materials specialists.

As technology and design techniques continue to improve, the net-zero movement is expected to pick up pace.  While cost is a current challenge with these projects, further advances in coming years should make many of these solutions more attainable for both small and large-scale net-zero projects.