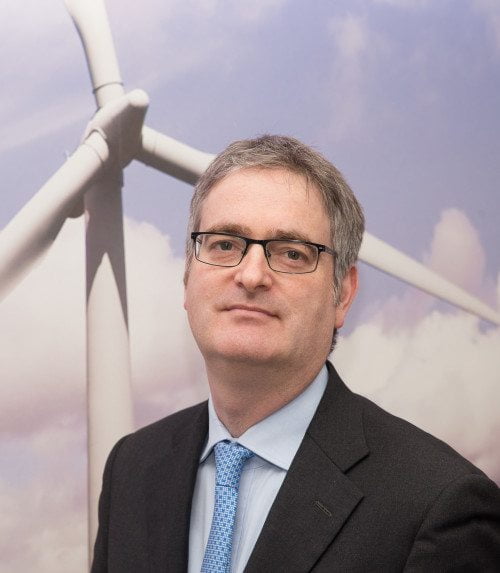 RenewableUK has announced that Hugh McNeal has been appointed as the trade association’s new Chief Executive. He will take up his new post in April.

Mr McNeal has worked as a civil servant for a substantial part of his career. He is currently Director of Change at the Department of Energy and Climate Change, improving the Department’s efficiency and delivering financial savings. His other roles have included Chief Executive of the Office for Renewable Energy Deployment at DECC, and Deputy Director of Low Carbon Business at the Department for Business, Innovation and Skills.
Hugh McNeal said: “It will be a privilege to represent an industry which is playing such a vital role in providing safe, secure power for our country’s homes and businesses, as well as tens of thousands of high quality jobs across the UK”.

He takes over as Chief Executive from Maria McCaffery MBE, who has headed the organisation since June 2006. During that time, she has overseen a significant expansion in the deployment of onshore and offshore wind, as well as the development of wave and tidal energy.

RenewableUK’s Chairman Julian Brown said: “Maria’s achievements as CEO have been extraordinary. When she took on the role, 1% of the UK’s electricity was generated by wind. By last year, that had increased to 11%. She has deservedly won the admiration and respect of everyone involved in this dynamic sector, and we wish her all the very best for the future.

“Now we have a new captain at the helm, and I’m confident that he will steer us to even greater successes in the future. Hugh brings an in-depth knowledge of the entire energy sector to RenewableUK at a crucial moment in the development of wind and marine power. I have no doubt that he will use his exceptional skills to represent the sector successfully, so that we can continue to increase the proportion of cost-effective electricity that we generate from home-grown sources, as well as creating jobs”.

RenewableUK’s Chief Executive Maria McCaffery said: “I am delighted to be handing over the reins of Chief Executive to such a capable pair of hands. I wish Hugh every success in his new role. He has a wealth of experience on energy policy and I have no doubt that he will be a highly effective champion of wind, wave and tidal energy”.