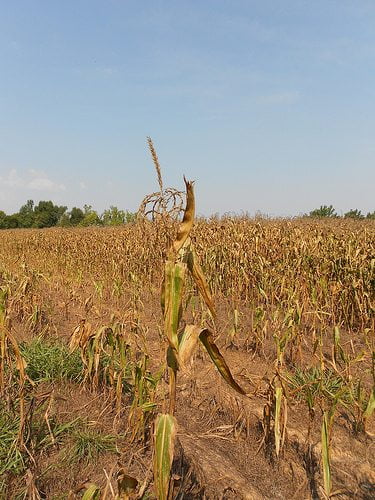 In a damning new report, the leading poverty charity estimates that current global warming trends, which will result in a world 4-6C warmer by 2100, could leave 400 million people blighted by famine and drought by mid-century.

While warming of this magnitude would have many devastating effects, it would have a severe impact on agricultural production in developing countries.

To prevent climate chaos, Oxfam urges governments to resist the lobbying and spending power of the fossil fuel industry and commit to cleaner sources of energy.

In the absence of tough climate legislation or a binding global deal to cut carbon emissions, the report warns that finance will continue to flow to fossil fuels, locking in further warming. In 2012, Oxfam say spending on fossil fuels exceeded $674 billion (£423bn).

“This ‘toxic triangle’ of political inertia, financial short-termism and vested fossil fuel interests stands in the way of the transition needed,” the report reads.

“The lack of necessary government ambition to shift away from fossil fuels results in continued investment by the global financial sector based on an assumption that fossil fuels are here to stay – buoyed by the rhetoric of the fossil fuel industry itself.”

Next week, EU leaders will meet to discuss a climate package that will set binding emissions targets for 2030. They are expected to agree on carbon emission reduction targets of 40% and an EU-wide target for renewable energy of 27%.

However, Oxfam say this is not enough if the bloc is to do its fair share.

“These commitments and proposals all demonstrate that the international community is beginning to wake up to the reality of climate change and adopt the necessary rhetoric. Yet carbon emission reduction offers on the table so far are not significant enough to advance the necessary transition, and thereby shift private and public finance accordingly,” the report says.

Calling for tougher action, Oxfam urges governments to shift investment to renewables and energy efficiency efforts and introduce policies to improve access to energy. It also calls for more transparency around lobbying, arguing that fossil fuel firms should be forced to disclose their spending on campaigning.

“We have the alternatives to fossil fuels. People are showing their resolve for action,” Oxfam campaigns director Ben Phillips said.

“It’s time for all of us to stand up to the fossil fuel companies who are holding up action to protect the world’s poorest people from hunger. It’s time for us all to break our addiction to fossil fuels.”