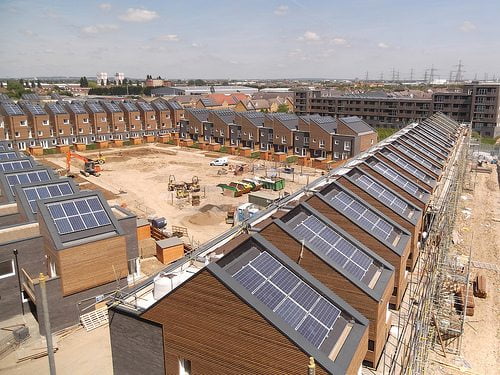 The latest renewable energy projects financed by crowdfunding firm Abundance Generation have attracted £700,000 of investment in just 35 days – taking the total raised by the firm to £3m since the summer of 2012.

Abundance, which connects investors with clean energy, raised the money for solar developments Brighter Schools and Oakapple One – both of which are now fully funded.

Brighter Schools, which involved installing solar panels onto the roofs of schools, and Oakapple One – a project to install solar panels on new-build homes – were both launched in July.

Investors were able to contribute as little as £5 towards both project and receive “inflation-beating” returns – as much as 8.6% annually – over a period of 20 years.

“To break all records in July and August, traditionally a slow months for investing, shows the growing potential of democratic finance and crowd funding to fill the gap left by banks in lending to this important infrastructure investment for the UK’s future energy needs”, he said.

Abundance aims to raise a further £10m by the end of 2013 through crowdfunding clean energy projects.

Future projects currently in the planning stage involve hydroelectric technology in Cheshire, which is a joint venture between Cheshire council and the University of Chester, as well as a number of wind turbines that are awaiting construction approval.

Rebecca O’Connor, editor of renewable energy investment platform Trillion Fund, recently highlighted the benefits of investing directly in renewable energy projects, saying, “Because the electricity a wind or solar park will generate is quite predictable, the performance of an investment in a project is likely to be less volatile than company shares.”