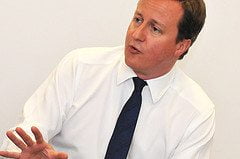 David Cameron has hit out at opponents of fracking, saying that they are “religiously opposed” to the controversial shale gas extraction method because of its environmental impact.

The prime minister appeared before the liaison committee in the House of Commons on Tuesday to give evidence on a number of issues, including fracking, which has been met with widespread opposition this week.

Cameron said that those “religiously” against fracking were being “irrational” and also unhelpful.

“There are some people who are opposing shale because they simply can’t bear the thought of another carbon-based fuel being used in our energy mix”, he said.

“I think that is irrational because it’s surely better for us to be extracting shale safely from our country rather than paying a large price for it being imported from around the world.”

He added, “I think why some people are so religiously opposed to it is because they just don’t want to see any carbon-based energy work, but I don’t think that’s helpful.”

The prime minister’s comments come after the government announced plans to allow local authorities to retain 100% of business rates collected from fracking sites. This incentive, along with £100,000 when a well is dug and 1% of all revenues from sites, was branded a “bribe” by environmental campaigners. They said that cash-strapped councils – which had seen their budgets slashed by the Treasury – could not be trusted to make the right decisions.

Statistics from a poll released after the government’s announcement about the incentives suggested that only one in five Britons would support fracking near to their homes. Interestingly, support for the extraction method grew as people’s distance from drill sites increased.

Some, including Cameron, speculate that fracking will bring down the cost of energy, though these claims were questioned by a leading economist in September last year.

Lord Stern, who is chair of the Grantham Research Institute on Climate Change at the London School of Economics, said “I do think it’s a bit odd to say you know that it will bring the price of gas down. That doesn’t look like sound economics to me. It’s baseless economics.”