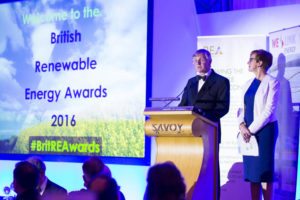 This year the British Renewable Energy Awards took place in the Lancaster Ballroom of the Savoy Hotel, London. Journalist Bill Turnbull hosted the awards, which celebrate individuals, companies and projects which show outstanding innovation and creativity which contributes to the progression of the energy industry. The Renewable Energy Association (REA) recognised seventeen organisations, individuals and projects at what was the 11th annual awards ceremony.

The REA congratulates all those nominated, shortlisted, “highly-commended,” and the winners of this year’s Awards.

Winners are as follows:

Commenting on the Awards Dr. Nina Skorupska CBE, Chief Executive of the REA, said: “It was a tremendous privilege to announce this year’s Renewable Energy Award winners. It has been a turbulent year as the industry navigated over a dozen significant policy changes. The extraordinary people, projects, and organisations highlighted here demonstrate the adaptability and perseverance of this industry.

“It was wonderful to honour those that have done so much to further the industry’s aims of creating a more affordable, accessible, and decarbonised energy system.”

In a statement read out at the ceremony, Judges Award winner Christiana Figueres, Executive Secretary of the UN Framework Convention on Climate Change said: “It is a great honour to be awarded the British Renewable Energy Judges’ Award 2016. I accept this award on behalf of the countless people, including in the United Kingdom, who worked tirelessly over many years to achieve success at the COP21 UN Climate Change Conference in Paris. The Paris Agreement adopted at COP21 is a turning point for the global response to the immense challenge of climate change.

“The gains in both cost and efficiency of renewables over the past decade were among the keys to building confidence and achieving Paris’s historic outcome. Renewable energy will equally be key to delivering a decarbonized, global economy by the second half of the century and also meeting many of the new Sustainable Development Goals.

“We should and we must celebrate Paris but we cannot sit on our laurels. Paris has given us the direction and the destination; it is time to redouble all our efforts.”