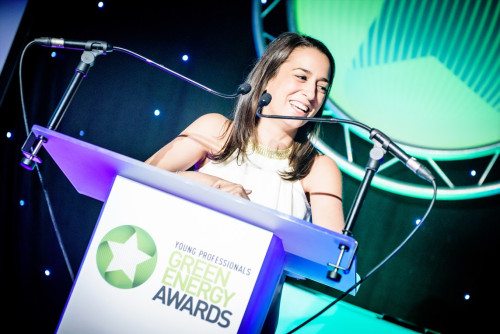 An award ceremony which last year acted as a springboard for young pioneers and innovators in renewable energy launches today for 2016. The Young Professionals Green Energy Awards, organised by industry body Scottish Renewables, is open to newcomers to renewables across nine categories, including Entrepreneur, Professional and Communicator.

Engineer Sandya Abrar credits her win in the Academic category in 2015 with leading to a slot addressing the youth version of the Paris climate talks.

In the last 12 months the graduate, who works for SSE, has also been invited to act as a judge for a sustainability competition at University College London.

This year’s awards, for which nominations are open from today (Jan 14), cover nine categories:

Niall Stuart, Chief Executive of Scottish Renewables, said: “This year’s Young Professionals Green Energy Awards will build on last year’s inaugural event and provide a showcase for the fantastic professional achievements of our industry’s next generation.

“No-one in renewables would argue that developing the skills and nurturing the talent of these young professionals is hugely important in making sure the industry is ready to face the future. The Young Professionals Green Energy Awards are our way of recognising the amazing work which is being done by people at the start of their careers, and the contribution that they are making to the overall success of the industry.”

Matthieu Hue, CEO of headline sponsor EDF Energy Renewables, said: “Renewable energy is an industry whose current and future success relies on nothing so much as the commitment, innovation and skill of the people who work in it.

“That’s why it’s crucial that we recognise the curiosity, talent and drive of the next generation, and why EDF Energy Renewables is proud to sponsor the 2016 Young Professionals Green Energy Awards.”

Sandya’s University of Edinburgh dissertation, ‘The impact of bioenergy development on the climate resilience of vulnerable communities in Kenya’, looked at whether villages in the African country would be sustainable in the face of climate change.

Since her work led to the 26-year-old being awarded the Academic Award at last year’s Young Professionals Green Energy Awards Sandya has addressed the Conference of Youth, the precursor to last December’s UN climate change talks in Paris.

She has also been invited to be a member of the jury board of the UCL University competition ‘Sustain the Future’, organised by the government of Kazakhstan, and published work in newsletters and on websites.

She said: “It was an honour to receive this award for my work and be part of such an inspiring event which celebrates the contribution of young professionals to business, communities and the renewable industry as a whole, and I would highly recommend anybody interested to apply.

“This award has really given me a push in my career and has opened many new doors to me. I wish others could be offered the same opportunity and benefit from it.”

Last year’s Young Professionals Green Energy Awards winners included Dr Eve Bird, of Edinburgh start-up Celtic Renewables, for her work in producing the first of a new generation of fuels from whisky industry waste, and Highland Council engineer Jackie Sayer, whose “pioneering and far-sighted approach” to the provision of biomass heating solutions to people in the Highlands resulted in significant carbon reductions.

Nominations for the awards are open from today until 5pm on March 3, and are open to anyone who has worked in the renewables industry for no more than six years. They can be made through www.scottishrenewables.com/events/young-professionals-green-energy-awards-2016/nominations, where tickets for the event, to be held at Glasgow Science Centre on May 26, can also be booked.