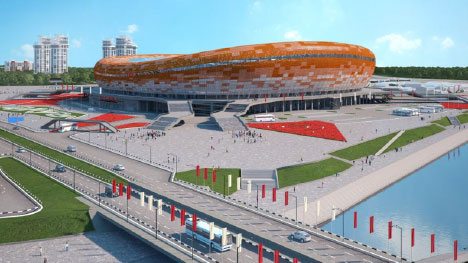 Six of the new stadiums required for the 2018 World Cup in Russia will be built with the help of a world-leading sustainable buildings assessor, in an effort to boost the international profile of green development.

As fans head home from Brazil and Germany return victorious, Russia must prepare for the unenviable task of meeting the standards set by this year’s thrilling tournament.

While they may not be able to match the excitement, organisers in Russia hope to at least beat the Brazilians in the field of sustainability.

The six stadiums, including projects at Samara, Volgograd and Nizhniy Novgorod, will be assessed under the internationally recognised BREEAM rating system.

Overall, some of the facilities are aiming for energy consumption that will be 40% lower than that of similar stadiums.

Detailed ecological and biodiversity studies will also be carried out, with measures taken to enhance local biodiversity.

“The World Cup 2018 stadiums, designed to BREEAM standards, will raise the bar of sustainable design and construction in Russia,” said Ksenia Agapova, associate director at Jones Lang Lasalle in Moscow, who will be acting as BREEAM advisor on three of the projects.

“Regulations in green building are not well developed here and few incentives exist for implementation of green technologies.

“We are looking forward to successful completion of these projects and expect increased public awareness of green building, as these venues attract a lot of attention,” she added.

In the run up to this year’s finals, football’s governing body Fifa outlined a sustainability strategy committed to minimising its impact on the environment.