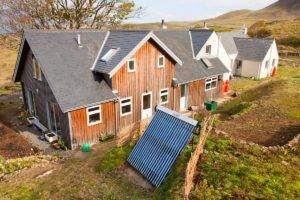 A new report released today [1] has suggested that it is possible to produce half of all of Scotland’s energy across transport, electricity and heat from renewables by 2030.

Based on independent analysis by leading global technical consultancy, Ricardo Energy and Environment, the report ‘The Energy of Scotland: Heating, moving and powering our lives from now to 2030’ sets out how Scotland’s climate targets could be met in the most cost effective way and finds that to do so 50% of all our energy will need to come from renewables by the end of next decade.

Identifying the key Scottish Government actions that should be taken to reach this target, the report suggests that by 2030:

· Two-fifths of Scotland’s homes will be heated from renewable sources, with a Warm Homes Act helping ensure access to cleaner, more affordable heat;

· A national energy efficiency programme will have helped reduce energy use in homes to 30% lower than that today and millions of homes across the country will have been insulated;

· One in three cars, and half of all buses, will be electric, in line with the long-term need to phase out fossil-fuel vehicles entirely;

· Scotland’s electricity will be, almost entirely, generated from renewables, with excess generation exported to our neighbours;

· Other welcome benefits would include the creation of new jobs; warmer, healthier homes; and cleaner air helping reduce the burden on the NHS.

The report by WWF Scotland, Friends of the Earth Scotland and RSPB Scotland, comes as the Scottish Government develops a new energy strategy, and follows manifesto commitments from several political parties to a 50% renewable all-energy target. [2]

“This report shows that a 50 per cent renewables target for all our energy needs by 2030 is not only needed, but that it is achievable. Ministers should now make this a Scottish Government target and bring in the policies needed in its forthcoming energy strategy. Doing so would enable Scotland to enjoy the many economic and social benefits that the report suggests would take place as result of generating half of all our energy needs from renewables.

“Scotland is already seeing the economic and social benefits of shifting our electricity system to clean, climate-friendly, renewables generation. However, with electricity accounting for just one quarter of our energy use, it’s time to begin to reap the same benefits by increasing the use of renewables in our heat and transport sectors.

“Our analysis provides the most sophisticated model yet for what Scotland’s energy system will look like in 2030 if climate targets are to be met in the most cost-effective way. A major transformation across all the energy sectors will need to take place, but the technologies are already available and Scotland has the renewable resources to supply them.”

“Heat has for too long been the neglected area of energy policy, and it is imperative that we move forward in this less familiar but vital area of our energy use. Technologies such as large heat pumps are ready, but to engage consumers in kicking our fossil fuel habits and capture the benefits including new jobs that being a leader in low carbon heat would bring, the Scottish Government needs much bolder policies to ensure adoption in new and retrofit situations.”

“When it comes to climate emissions, Scotland’s transport sector is stuck in neutral, with emissions barely reduced on where they were in 1990. Yet there is a lot more that could be done. We need to level the playing field so that public transport, cycling and walking can compete with the private car, and have a long-term strategy that clearly shows how all transport will shift over to low-carbon.”

“We are pleased to be joining WWF Scotland and Friends of the Earth Scotland in calling on Scottish Government to set a 50% renewable energy target for 2030. Bringing down the emissions of our whole energy system, including strong action on heat and transport, is crucial to protect our natural environment from climate change. We know that, if we plan the roll out of renewables carefully to avoid our most sensitive places for wildlife, we can meet these targets in harmony with nature.”

“This report shows that investing in tackling climate change brings many other benefits, including helping create jobs in low-carbon sectors, improving people’s living conditions and cleaning up the toxic traffic pollution that blights our towns and cities. Any way you look at it, a rapid transition to renewable energy makes sense.”
Responding to calls from WWF Scotland for a Scottish 50% renewable energy target;

Niall Stuart, Chief Executive of Scottish Renewables, said: “Scotland’s ambitious climate change and 2020 renewable energy targets have signalled a clear intent for the country to lead the way in the transition to a low-carbon economy – and driven tremendous growth in renewable electricity generation.

“However, it’s now time to lift our horizons and set an ambitious target to drive investment in renewable heat, power and transport through the 2020s.

“This report echoes Scottish Renewables’ call for a new 50% renewable energy target and, importantly, concludes that this is both achievable and key to meeting our climate change targets.

“A new energy strategy with an ambitious new target would ensure that renewables can play a key role in meeting Scotland’s climate change targets and maximise the jobs and investment that our sector can bring to Scotland.”