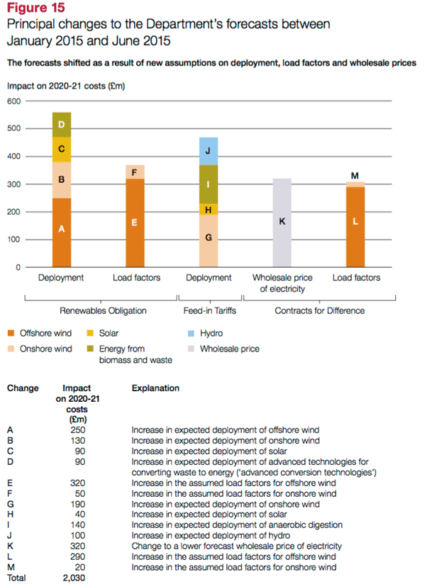 Small Role Of Solar In Energy Overspend Revealed By NAO

A report has been published today by the National Audit Office on the Levy Control Framework (LCF), which controls expenditure on low carbon power generation.

The report is critical of the management of the LCF, which resulted in a sudden increase of just over £2billion on forecast expenditure between January 2015 and June 2015. This in turn led to drastic policy changes, particularly for the solar industry. The overspend has since been revised downwards bringing LCF expenditure within the 20% limits of allowable headroom.

However, for the first time, the report provides a very clear break down of the reasons for the apparent overspend on the LCF, which the STA & Parliamentary Climate Change Committee, amongst others, have sought transparency on. The NAO analysis shows that solar contributed just £130m, or just 6% of the sudden £2billion increase in expenditure.

NAO analysis shows solar accounts for only 6% of the overspend – but solar has borne the brunt of corrective measures.

“The unexpected growth in solar power was repeatedly fingered as a key reason for the overspend on renewables. In fact NAO analysis shows solar accounts for only 6% of the overspend – but solar has borne the brunt of corrective measures. That’s a great shame when the technology has become so popular and is now so affordable. We hope the new Department will take stock of the low cost impact of solar and act to restore confidence to the sector.”

The STA is seeking a further Contracts-for-Difference allocation round for established ‘Pot 1’ technologies. The STA has also put forward essential proposals to reform the troubled FIT scheme, which would require only £6million of additional resourcing over this Parliament.