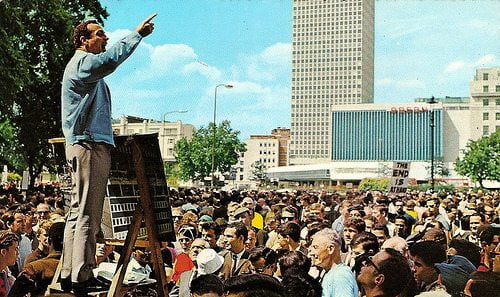 We are dramatically altering the planet and environment on which society’s prosperity depends – yet talk to the ‘man at the pub’, and he’s apathetic, inert and often cynical at all this “green nonsense”. For Blue & Green Tomorrow’s third birthday, Alex Blackburne looks at how best to communicate the gravity of the threats we face – and indeed, if we even need to.

If there’s one thing I’ve learnt since joining Blue & Green Tomorrow just over two years ago, it’s that not everyone shares my interest in sustainability and environmental issues. I often quip, with a pinch of sadness, that I become the most boring person in the pub after a couple of pints.

For some odd reason, my friends and family don’t enjoy me telling them their bank launders money for Mexican drug barons or their energy supplier is helping screw up the planet for future generations. Yet it does, and it is.

When I first joined the magazine, I remember our publisher Simon Leadbetter doing a “Welcome to Blue & Green Tomorrow” presentation (that he still uses today) about what it stands for and why it exists.

I hadn’t thought of myself as a particularly impressionable person prior to this – and I’m the first to admit that at the time, I knew no more than the layperson about the issues I now write about every day – but the images, statistics and charts that I was shown on that first day struck a real chord. As such, my ambition of becoming a sports journalist quickly went out the window.

When it came to investment, not investing in companies that had atrocious human rights records, contributed to environmental degradation or were simply part of an ‘unethical’ industry seemed obvious. As did channelling capital towards burgeoning, exciting new sectors like renewable energy and cleantech.

However, while by no means representing the full extent of the challenges the world faces, it became evident pretty quickly that climate change was the big issue.

From the very beginning, B&GT has grappled with how to best approach it. For starters, the science tells us that man-made emissions (from the burning of fossil fuels such as oil, gas and coal) are contributing to global average temperature increases, posing a threat to the environment that society’s prosperity depends. While there is and should be debates on how to tackle the problem, the fact that it exists and is indeed a problem is not up for debate (in the same way that we accept the causal link between smoking and cancer).

Because it represents such a fundamental threat to our way of life, and is the sole or primary motivation for many people working or investing in the sustainability space, we naturally write articles about it.

Where the difficulty lies, however, is when we’re writing about our core tenet: sustainable investment.

Trying to avoid preaching to the converted was something that was drummed into me when I started at B&GT, and is something I share with colleagues to this day. We have never wanted to be another ‘green’ magazine (we prefer blue and green, anyway), as there are plenty of titles out there fighting the good fight doing just that – and doing it excellently, might I add.

But if we are to succeed in doing this, we have to accept that there are investors and consumers out there who will deny that manmade climate change exists (a poll from 2012 found that in the UK and the US – our two biggest countries of readership – only 65% and 58% respectively thought that humans were mostly responsible for climate change).

We know that the presence of online ‘filter bubbles’ can help reinforce one’s view on a topic like climate change, regardless of the side of the fence you sit (Avaaz and Upworthy founder Eli Pariser once said, “The internet is showing us what it thinks we want to see, but not necessarily what we need to see”); and we know (and have experienced first-hand) that engaging in the climate change debate invites trolls.

So, all things considered, we therefore look for other drivers to encourage our readers to invest sustainably. Instead of, “Your investments in fossil fuels firms are causing climate change”, it’s, “Your investments in fossil fuels firms will be worthless financially in the future.” Economic or financial reasons (i.e. X is cheaper than Y, and X happens to be greener than Y) can be very effective.

The communication dilemma is one that I’ve pondered in recent months, and asked a number of interviewees for their take on it.

Peter Ainsworth, the former Conservative MP and shadow environment secretary, spoke to me earlier this year about the “enormous difficulty” he had experienced for himself, while trying to communicate the gravity of the threat posed by climate change to the layperson.

Another interesting perspective came from Kevin Anderson, a climate scientist based at the University of Manchester. After sitting through an hour-long presentation of his on climate change during National Ethical Investment Week I felt suitably terrified. I asked him afterwards how he suggested communicating the issues raised in his presentation to the layperson. His answer? We don’t need to.

Instead, he said, we need to play up the wider financial and social benefits of being more energy efficient and less wasteful.

Anderson spoke about how in the UK, we sell (though no longer manufacture) A-rated fridges – even though there are A+, A++ and A+++ models available which in some cases use 85% less energy than the older versions. Firstly, it’s mad that we still sell the inefficient models, but secondly, the cost savings involved with using 85% less power are huge.

To conclude, I turn to The Debunking Handbook, an essential nine-page document from the brilliant Skeptical Science. “When you debunk a myth, you create a gap in the person’s mind”, it says. “To be effective, your debunking must fill that gap.” Filling these gaps and connecting these dots is what Blue & Green Tomorrow is all about. Omnia coniuncta; all things are connected.

In an interview in 2012, Chasing Ice star James Balog told me, “We are clearly in the middle of a crisis already. We are not looking at the crisis coming at us in the future; the crisis is upon us.”

Let’s not play down the gravity of the threat posed by climate change. It clearly exists, and clearly matters. But the key in successfully overcoming it could lie with effective communication to the broader society.