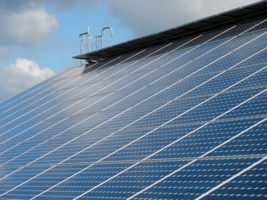 Stratford Community Energy’s new clean energy site is soaring through its first month. The Warwickshire based solar energy site has exceeded its generation target by a huge 12 per cent. The surplus energy has been sold and profits have been put towards worthy schools, charities, projects and campaigns in the area.

The 11.8 hectare Leys solar farm benefits both the environment and local community groups by creating renewable energy and giving a portion of profits from the sale of power to nearby worthy causes.

In its first month of operation the site performed at 112 per cent of its design, meaning it generated more than its target for energy production. The first payment has also been made to one of the beneficiaries of the project, with Welford on Avon Primary School receiving a windfall of £2,000.

Adrian Pike, chairman of Stratford Community Energy, said: “The entire board is extremely pleased with how much the project has achieved in its first month of operation. The fact that the solar farm’s performance is well above target is great news for those who have invested in the project, as well as for the charities that will benefit from the sale of energy.”

Julie Leeman, Headteacher at Welford on Avon Primary School, which will receive £50,000 from Stratford Community Energy over the next two and a half decades, said: “We’re delighted to receive this very generous first donation from Stratford Community Energy. It will be used to invest in new equipment for the school which is fantastic news for our pupils. We look forward to working closely with the community energy project going forward.”

The Stratford Community Energy project is funded by a mixture of private and public investment. Members of the public can buy into the project through the purchase of bonds, which offer 5% gross returns, with the interest paid every six months for an initial three-year term.

The funds raised for the Stratford Community Energy project ended yesterday and Adrian Pike says he has been impressed with the level of interest from investors.

He said: “The response to the offer shows there’s a real demand for this type of investment, which provides strong returns as well as benefits for the environment and local people. We believe this is a fantastic opportunity for people to be involved in a community project that has the potential to make a real difference on so many levels.”