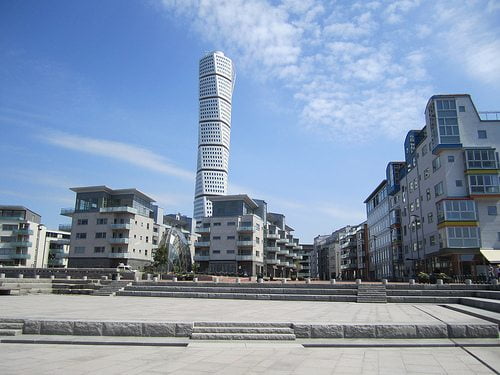 Malmö, Sweden’s third largest city and the capital of Skåne County, was once an industrial centre, known for its shipyards and factories. When the Swedish financial crisis hit the local economy hard, it began a reinvention that recast it as a cultural hub with an environmental conscience.

Much like the capital Stockholm, Malmö has endeavoured to become an environmental leader as part of Sweden’s impressive bid to become the world’s most sustainable country.

The district – like much of the city – is also serviced by remarkably regular buses, and has programmed infrastructure to encourage cycling and car sharing.

The entire city is connected by 470km of bicycle paths, even more than its famously bike-friendly Scandinavian cousin Copenhagen.

Other developments are in the pipeline to match or even usurp the western harbour, with a 9,000 home and workplace project in the Hyllie area set to be the most climate progressive area in the region – according to a contract signed by the authorities and E.ON.

Malmö has also committed to incorporating green spaces into the urban environment. In 2012, the project ‘Biodivercity’ was launched to support the city’s greenery and investigate the potential health benefits of leafier surroundings for residents.

This is all just the beginning for Malmö’s journey towards sustainability. The city administration plans to be climate neutral by 2020, and by 2030 the whole city will run entirely on renewable energy.

Other cities with industrial pasts and uncertain futures would do well to observe Malmö’s green rebirth.