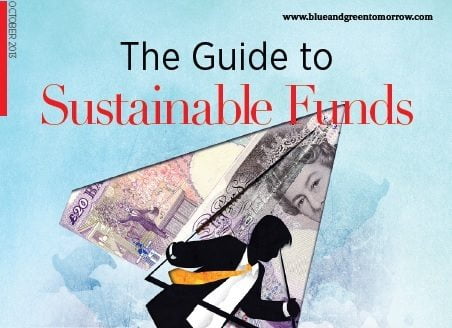 Blue & Green Tomorrow’s Guide to Sustainable Funds 2013 looks at 134 ethical and sustainable investment funds. If you want to invest in a vehicle that offers wider benefits – either to society, the environment or both – as well as generating a healthy financial return, you’re in the right place.

Data by the ethical investment research firm EIRIS, released in the run-up to this year’s National Ethical Investment Week, suggested there was a record £12 billion invested in UK green and ethical retail funds, as of June 2013. This represented a rise of around £1.2 billion from 2012, and a dramatic increase from the £4 billion that EIRIS said was invested in such funds in 2001.

However, the 134 investment funds in this guide – taken from Blue & Green Tomorrow’s sister site Blue & Green Investor (which in turn gets its information from Financial Express) – were worth over £22 billion as of October.

Both sets of data suggest ethical and sustainable investment is on the rise, and recent excellent return statistics bust the age-old myth of underperformance by such funds. Blue & Green analysis shows that 19 out of 21 UK ethical equity funds had outperformed the FTSE 100 over the past year. Meanwhile, the overall top performing fund – Guinness Alternative Energy – returned 85% in the year until October 16, compared to the FTSE 100’s 12%.

Whether it’s a themed fund – investing in clean energy, agriculture, forestry, water and so on; a negatively screened fund – avoiding harmful or unethical industries; or simply a fund that seeks to tackle key sustainability challenges, the Blue & Green database has something to match your criteria.

On the go? Download the mobile version (5MB file).

To see a full list of all our 2013 reports, on topics such as investment, tourism, clean energy and financial advice, see here. The seven reports we produced in 2012, tackling issues from sustainable banking to responsible media, can be accessed here.