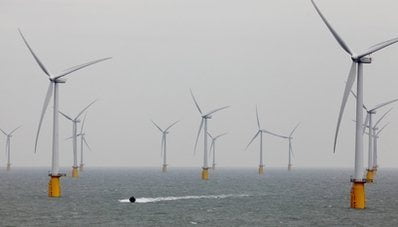 The offshore wind potential in Britain is crucial to meet carbon targets and boost growth, but clear strategies are needed to promote local manufacturing, according to a study by a leading thinktank.

The Institute for Public Policy Research (IPPR) says Britain is geographically blessed with huge potential for the development of wind energy sources, which could also be exported as well as being used domestically.

Offshore wind in particular would help the UK to meet its climate goals and boost economic growth in the region, thanks to the creation of jobs in the wind turbine manufacturing, construction and maintenance sectors.

However, the IPPR said offshore wind is penalised because of the higher costs involved. In addition, there is a lack of local producers in the supply chain. It added, “There are no turbine manufacturers in the UK, and turbines make up around 50% of the capital costs of a new wind farm.”

Filling this gap would be essential to keep costs down and maximise the return derived from UK’s wind. The thinktank said that a lack of clear long-term investment strategy from the government is not helping to unlock the vast potential for the wind sector and has called for policy certainty.

RenewableUK’s director of external affairs, Jennifer Webber, commented on the report. She said, “This report makes a number of key recommendations which, if adopted by government, would stimulate the healthy growth of the offshore wind industry not just for the rest of this decade, but also in the decade which follows.

“It rightly notes that we’ve made progress on the development of the UK supply chain in areas such as manufacturing foundations and electrical equipment, but we must ensure that we reap the full manufacturing benefits by bringing big offshore turbine factories to ports around the UK rather than seeing them sited elsewhere in Europe.”

The publication comes shortly after the launch of the world’s largest offshore wind farm, the London Array, off the coast of Kent. Meanwhile in May, the Renewable Energy Country Attractiveness Indices by Ernst & Young revealed that the UK was the most attractive country for investors in the offshore wind sector.