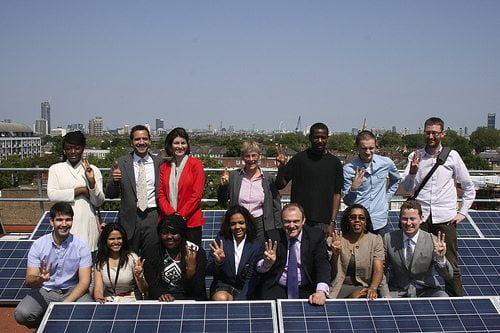 On Brixton’s Loughborough Estate in south London, two community-owned solar energy projects – Brixton Energy Solar 1 and 2 – are providing power to social housing while also funding a scheme for energy-saving improvements, education and training to help alleviate fuel poverty. Now a third project, Brixton Energy Solar 3, has been launched by the same group on the nearby Roupell Park Estate. All three schemes rely on investments from ordinary people.

I visited Brixton Energy 2 for my new book, The Armchair Activist’s Handbook, which looks at alternative ways to take action away from chants-and-banners protest. I wanted to find out whether investing in this type of project could be a valuable way for people to make a difference.

Standing on the top of one of the housing estate blocks and speaking to the project’s founder Agamemnon Otero, I felt that Brixton Energy promises real positive potential for this part of London, and for those wanting to invest in a greener world.

The projects offer investors the opportunity to give practical support to a growing renewable energy movement, to reduce fuel poverty, and to take some control of the energy sector at a time when there is a fair amount of discontent surrounding the conduct of the ‘big six’ energy firms. Brixton Energy estimates that the Roupell Park project will provide an average annual return on investment of approximately four per cent and investors will be able to claim a 50% lump sum tax deduction in year one.

On a wider scale, there is evidence out there to suggest that community-owned renewable energy can really make an impact. Back in 2012, a report from thinktank ResPublica argued that involving communities in energy provision has tangible benefits for environmental, social and economic targets in the UK.

More recently, a report by Smartest Energy, a purchaser of energy generated by the independent energy sector, argued, “The combined impact of a large number of independent schemes is starting to make a difference to the nation’s climate change targets”.

It added that renewable energy projects developed by businesses, communities, farmers and the public sector now have enough combined generating capacity to power nearly four million households – enough for the south-east of England – and are generating £768m worth of electricity.

In addition, the government is showing an interest, having just concluded a consultation with the stated intention of unlocking the potential of community energy. The UK’s first ever Community Energy Strategy is to be published in the autumn.

There seems to be an appetite for investing in such projects. A recent poll for the Institution of Mechanical Engineers showed that a third of us would consider personally investing in small-scale community renewables such as wind farms, solar arrays or small-scale biomass plants. Fifty one per cent of people think the government should support the construction of more renewable energy sources such as solar, wave and tidal power.

Part of the reason the sector is gaining ground, perhaps, is that making an investment is becoming increasingly accessible. Sites such as Abundance Generation, which launched last year, link up communities and individuals with renewable energy projects.

Abundance says it aims to double investors’ money and argues that energy projects offer long-term, predictable returns, among other benefits. So far, a total of £2.3m has been invested through the site.

Microgenius is a similar website that links investors with community shares projects, including community energy schemes. And there is Energy 4 All, which supports eight renewable energy cooperatives. Its latest project, the Spirit of Lanarkshire Wind Energy Co-operative, has attracted more than £600,000 in its first month.

It’s not necessary to live in the local vicinity of an energy scheme to sign up as a backer, although those based nearby will be able to see more clearly – and even directly experience – the benefits of where their money is going.

For Otero, community-owned energy is about offering an alternative that benefits people and planet, showing consumers that they can stop renting energy and start owning it. At the moment, the project is required to sell most of its energy back to the grid, but it has big ambitions: in the long-term, Brixton Energy would like to be able to set up as a provider and sell energy directly back to investors and those living in the local area.

According to the Community Energy Coalition, more than 20% of Germany’s electricity is produced from renewable sources, with communities generating about a quarter of this. In the UK, less than 1% of renewable energy is generated by communities, but Germany shows that it can be scaled up.

As with any investment, there will always be risks (a summary of which can be found in the offer document of any project). But I’ve come to believe that projects such as Brixton Energy can be a way for investors to become activists. For those with money to invest and a desire to support a more sustainable future, this is an area well worth looking into.

Ruth Stokes is a freelance journalist and author of The Armchair Activist’s Handbook. She tweets @ruth_stokes and @armchairaction, and has a website at www.ruthstokes.com.