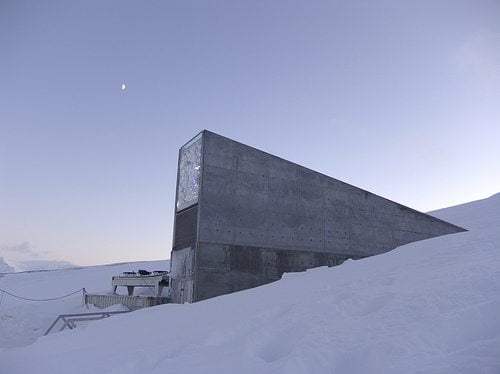 A shipment of more than 20,000 crops from more than 100 nations has arrived at a ‘Doomsday vault’ in the Arctic Circle, as part of a project seeking to protect biodiversity in case of a global disaster.

Hidden deep underground, inside a mountain on a remote island in the remote Svalbard archipelago, the £5m vault was designed to offer protection for all food crops in case of any natural or manmade global disaster.

All that can be seen above ground is a tall, metallic door jutting out of the mountain.

The Global Crop Diversity Trust (GCDT), which maintains the vault, says that its air-locked doors, thick walls, and the permafrost and rock above would protect the samples inside from any eventuality.

Speaking ahead of a meeting at the vault, Marie Haga, the trust’s Norwegian executive director, said, “Our annual gatherings at the seed vault are a sort of winter Olympics of crop diversity, only we are not competing against each other but against the wide array of threats, natural and manmade, ranged against the diversity of food crops, diversity that is so crucial to the future of human civilisation.

“Each and every single deposit into the vault provides an option for the future. At a time of unprecedented demands on our natural environment, it is critical to conserve plant genetic resources for food and agriculture.

“We need to feed one billion more people in the next ten years and we have to do this in the midst of climate change.”

The shipment is the first to include samples from Japan. In the wake of the 2011 earthquake and tsunami, Okayama University’s Barley Germplasm Centre realised that its own stores were vulnerable.

“If something bad happened to our gene bank, these resources could be damaged permanently,” Prof Kazuhiro Sato of Okayama University said.

“Barley is very important not just for Japan but for the world’s food security. We need to do everything we can to ensure they will be available to future generations.”

So far, no one has needed to retrieve vault’s stores. But crucially, nations know than in any worst case scenario, the Doomsday vault will stand firm for centuries to come.