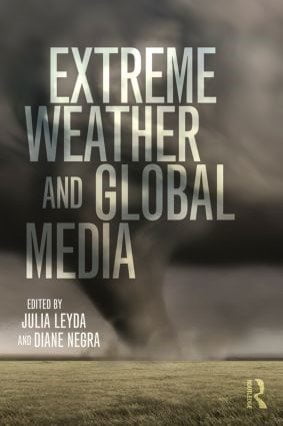 Abandon all travel! Don’t go outside! It’s all storms, floods, and heat waves! But, DON’T PANIC!

There is no calm before the storm, as #snowmaggedon and #frankenstorm hit. Since the turn of the millennium, large-scale weather disasters have been seemingly more common, and more commonly reported by the media as ‘special events’.

Media reaction to extreme weather has therefore shaped how communities react to it, has exasperated the potential for mass panic, and has driven public responses to aid as the media cultivates the conditions of permanent crisis.

By exploring recent and ongoing disasters such as Superstorm Sandy, the Fukushima nuclear crisis, flooding in Germany, and heat waves in the UK, Extreme Weather and Global Media illustrates how our world is increasingly affected by extreme weather, but perhaps more importantly, the way we experience extreme weather is shaped by how we understand the situation by means of media ‘spectacle’ and ‘occasion’.

Specifically, contributors argue that the intense promotion and consumption of extreme weather events makes up for the lack of public conversation society is having about the environment, and the feeling of powerlessness that accompanies the realization that climate change has now reached a point of no return. The books features thus include:

– A range of international contributors writing about international examples of extreme weather and global media, making this book a truly inclusive representation.

– Most notably, the book also brings together two areas that are under connected, but are growing in interest: environmental studies and media studies.

Extreme Weather and Global Media is an important reminder that weather is all around us, proliferating in every medium, swirling through communities, and becoming more volatile in the era of climate change. This highly original collection of essays therefore brings together the critical insights of media studies to the study of environmental humanities, in order to elaborate on the complexities of cultural politics and the implications of hyper-mediation by media broadcasters.