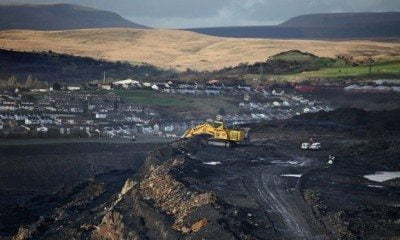 Activists from Wales and beyond set up the campsite for Reclaim the Power’s ‘End Coal Now’ campaign. The camp is in on common ground in the Darran Valley, Caerphilly very close to where Miller Argent want to mine for six million tonnes of coal at Nant Llesg.

The ‘End Coal Now’ camp is being organised by climate activist network Reclaim the Power. Participants are calling for a ban on opencast coal mining across Wales and the UK alongside the creation of thousands of green jobs, to tackle climate change and dangerous air pollution in Welsh communities.

Ellen Gibson, a spokeswoman from the camp, said: “We’ve come to Merthyr Tydfil today to support the local community who have battled the giant Ffos-y-fran mine polluting their homes and our planet for nearly a decade.

“We calling for an end to opencast coal mines in Wales and across the UK, and a transition away from polluting energy, towards clean energy and thousands of jobs.

“The camp is open to anyone who wants to learn more about the issue or to be part of the mass action. We welcome everyone to come down and get involved.”

Over the weekend the camp has featured three days of workshops, music and action planning, ahead of today when the activists will shut down the opencast coal mine.

Prior to the mass trespass to halt mining operations at Ffos-y-fran, Reclaim the Power invited assembly candidates and local councillors to support their opposition to the Nant Llesg coal mine at a “Solidarity Sunday” rally on Sunday May 1.

The camp has been welcomed by local campaigners, who have opposed the 11 million tonne Ffos-y-fran opencast coal mine since 2007 and are now fighting a new proposed mine next door at Nant Llesg.

Caerphilly County Council rejected the application for the new mine in August 2015 but the coal company Miller Argent is trying to overturn this decision through an appeal.

To find out more visit the Reclaim the Power website here.