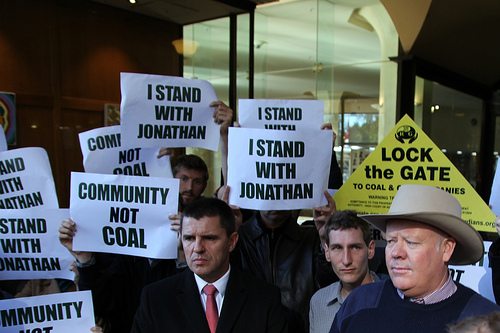 An Australian activist who allegedly created a fake press release that caused a $300m drop in a major coal company’s share price has been released on bail.

The press release triggered a sudden share market sell-off when it was picked up by journalists. Whitehaven’s price dropped about 9%, although its stocks later recovered.

Moylan has been charged with making a false and misleading statement under the Corporations Act.

He had been taking part in a protest camp in Leard State Forest, the site of the proposed mine. He said the hoax was conceived and carried out from the forest camp using a laptop and mobile phone.

Moylan has been told he may face 10 years in prison.

His lawyer John Sutton said, “This matter is larger than Jonathan Moylan; this matter is about the destruction of the environment of the Laird Forest.”

It was reported last week that the Maules Creek project was to proceed despite legal action from the Northern Inland Council for the Environment, which questioned the validity of its environmental license.

While the fake press release incorrectly claimed that ANZ Bank had divested from the project on ethical grounds, some major financial institutions have recently announced steps to restrict their funding of fossil fuel projects.

Last week, the World Bank proposed a plan to phase out coal investment, and at the beginning of July, Norwegian pension fund Storebrand revealed it would be divesting from 19 fossil fuel firms for financial reasons.

Bill McKibben, co-founder of climate change campaigners 350, has called divestment “the answer” to the environmental damage caused by use of fossil fuels.