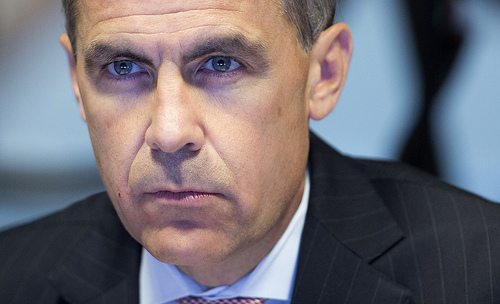 In a speech given at Lloyd’s of London – ‘Breaking the tragedy of the horizon: climate change and financial stability’ – Mark Carney, warned: “the catastrophic impacts of climate change will be felt beyond the traditional horizons of most actors – imposing a cost on future generations” and “climate change will threaten financial resilience and longer-term prosperity.”

In an in-depth analysis well worth reading in full here, Carney powerfully put the case that: “There is a growing international consensus that climate change is unequivocal. Many of the changes in our world since the 1950s are without precedent: not merely over decades but over millennia.”

“Evidence is mounting of man’s role in climate change. Human drivers are judged extremely likely to have been the dominant cause of global warming since the mid-20th century. While natural fluctuations may mask it temporarily, the underlying human-induced warming trend of two-tenths of a degree per decade has continued unabated since the 1970s.

“While there is always room for scientific disagreement about climate change (as there is with any scientific issue) I have found that insurers are amongst the most determined advocates for tackling it sooner rather than later. And little wonder. While others have been debating the theory, you have been dealing with the reality

“Since the 1980s the number of registered weather-related loss events has tripled; and Inflation-adjusted insurance losses from these events have increased from an annual average of around $10bn in the 1980s to around $50bn over the past decade.

“The challenges currently posed by climate change pale in significance compared with what might come. The far-sighted amongst you are anticipating broader global impacts on property, migration and political stability, as well as food and water security.

“So why isn’t more being done to address it? A classic problem in environmental economics is the tragedy of the commons. The solution to it lies in property rights and supply management.

“Climate change is the Tragedy of the Horizon.”

He went on to say: “…the IPCC’s estimate of a carbon budget that would likely limit global temperature rises to 2 degrees above pre-industrial levels. That budget amounts to between 1/5th and 1/3rd world’s proven reserves of oil, gas and coal. If that estimate is even approximately correct it would render the vast majority of reserves “stranded” – oil, gas and coal that will be literally unburnable without expensive carbon capture technology, which itself alters fossil fuel economics.

“The exposure of UK investors, including insurance companies, to these shifts is potentially huge. 19% of FTSE 100 companies are in natural resource and extraction sectors; and a further 11% by value are in power utilities, chemicals, construction and industrial goods sectors. Globally, these two tiers of companies between them account for around one third of equity and fixed income assets.

“On the other hand, financing the de-carbonisation of our economy is a major opportunity for insurers as long-term investors. It implies a sweeping reallocation of resources and a technological revolution, with investment in long-term infrastructure assets at roughly quadruple the present rate. For this to happen, “green” finance cannot conceivably remain a niche interest over the medium term.”

He called for a: “A climate disclosure task force”

“That better information – about the costs, opportunities and risks created by climate change – can promote timely responses is not a new idea. Much the opposite: there are already nearly 400 initiatives to provide such information.

“Existing schemes vary in their status (from laws to voluntary guidance); scope (from greenhouse gas emissions to broader environmental risks); and ambition (from simple disclosure to full explanations of mitigation and divestment strategies). In aggregate over 90% of FTSE 100 firms and 80% of Fortune Global 500 firms participate in these various initiatives. For instance, the Carbon Disclosure Project makes available disclosure from 5,000 companies to investment managers responsible for over $90 trillion of assets.

“The existing surfeit of existing schemes and fragmented disclosures means a risk of getting “lost in the right direction. In any field, financial, scientific or other, the most effective disclosures are:

– Consistent – in scope and objective across the relevant industries and sectors;
– Comparable – to allow investors to assess peers and aggregate risks;
– Reliable – to ensure users can trust data;
– Clear – presented in a way that makes complex information understandable; and
– Efficient – minimising costs and burdens while maximising benefits.

Meeting these standards requires coordination, something the G20 and FSB are uniquely placed to provide.”

“One idea is to establish an industry-led group, a Climate Disclosure Task Force, to design and deliver a voluntary standard for disclosure by those companies that produce or emit carbon.”

“Companies would disclose not only what they are emitting today, but how they plan their transition to the net-zero world of the future. The G20 – whose member states account for around 85% of global emissions – has a unique ability to make this possible.”

In conclusion he said: “Our societies face a series of profound environmental and social challenges. The combination of the weight of scientific evidence and the dynamics of the financial system suggest that, in the fullness of time, climate change will threaten financial resilience and longer-term prosperity. While there is still time to act, the window of opportunity is finite and shrinking. Others will need to learn from Lloyd’s example in combining data, technology and expert judgment to measure and manage risks.

“The December meetings in Paris will work towards plans to curb carbon emissions and encourage the funding of new technologies.  We will need the market to work alongside in order to maximise their impact. With better information as a foundation, we can build a virtuous circle of better understanding of tomorrow’s risks, better pricing for investors, better decisions by policymakers, and a smoother transition to a lower-carbon economy.

“By managing what gets measured, we can break the Tragedy of the Horizon.”