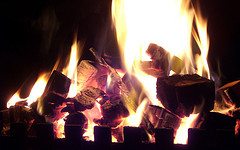 Black carbon – a form of pollutant with a particularly potent warming affect on the climate – has been linked to the increased risk of cardiovascular disease.

In a new study, researchers have investigated the impacts of the dangerous pollutant on those exposed to it on a daily basis.

A particulate matter that has a greenhouse effect two-thirds that of carbon dioxide – black carbon is emitted during the incomplete combustion of fossil fuels.

The main sources of the pollutant include things like diesel engines, but black carbon is a particular problem when it is emitted from domestic gas stoves and wood fires in the developing world.

Black carbon has already been linked to health problems, and in cramped homes it can have a devastating impact on vulnerable families.

The new analysis studied 280 women in China’s rural Yunnan province. Many of the women, like an estimated 700 million Chinese households, depend on black carbon-emitting traditional stoves.

Outfitting the women with air samplers, the researchers discovered that out of a range of different pollutants, black carbon was the most harmful.

“Black carbon from wood burning is considered very important for climate warming. Our research shows that it may also be an important pollutant for health.”

The researchers also found that women living closer to highways had blood pressure three times higher than women who lived further away, suggesting traffic emissions are exacerbating the problem.

“We found that black carbon from wood smoke negatively affects cardiovascular health, and that the health effects off wood smoke are exacerbated by co-exposure to motor vehicle emissions,” explained Baumgartner.

A separate study published on Monday similarly suggested that policies introduced in the US to reduce carbon emissions could save billions in healthcare costs. The Massachusetts Institute of Technology (MIT) report calculated that some carbon-cutting measures could even pay for themselves, by easing the pressure pollution heaps on healthcare spending.

China’s former health minister Chen Zhu has estimated that air pollution – the fourth biggest killer in Beijing – accounts for up to 500,000 premature deaths in China each year.

Worldwide, the World Health Organisation says that 7 million people died in 2012 as a result of pollution from industry, cooking fires and transportation fumes.