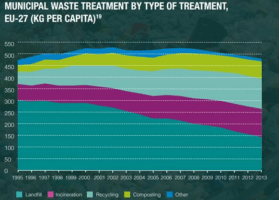 How Can Natural Capital Be Valued By EdenTree

Natural capital can be described as both renewable and  non-renewable stocks of natural resources and the services they provide – basically it is everything nature offers for “free”. Markets do not take into account the ‘free’ services provided by nature, therefore a variety of initiatives have emerged to value natural capital.

Valuation is key element if better decision making and accounting are to begin to value our planet’s assets. Both ‘polluter pays’ and ‘beneficiary pays’ examples have appeared.

The Payment for Ecosystem Services Scheme used in Costa Rica is an example of the successful application of the beneficiary pays model. Costa Rica is one of the leading countries when it comes to nature conservation. It pioneered the payment of land owners to protect its forests and its different ecosystem services including wildlife habitat and carbon storage. Costa Rica’s PES has enabled the country’s forest cover to increase from as little as 20% in the 1980s to over 50% today.

A similar approach was used by Nestlé, which used PES to encourage farmers surrounding the Vittel water catchment to change their farming practices. Cash payments were made to reduce ground water pollution through changes in animal feeding, reducing stocking rates per hectare and lowering agrochemical use. The PES was used to ensure future continuity of the business in the area.

Biodiversity offsetting aspires to compensate for biodiversity losses caused in development projects. The process aims to achieve conservation in order to keep the impact of a new project to a minimum whilst achieving zero net loss through the creation or enhancement of nature sites elsewhere.

Biodiversity offsetting can be achieved either through the payment of offsetting fees or the purchase of biodiversity credits. Both methods are used to counterbalance and compensate for the impact of a project on biodiversity when the initial loss cannot be avoided or mitigated. However, offsetting is controversial with some questioning whether the impact of the offset is positive, and if the initiative genuinely provides an alternative to no action at all. The question remains whether it is possible to ‘swap’ nature and whether potentially unique biodiversity destruction can ever be offset?

The ‘polluter pays’ principle is another way to value natural capital and translates in taxes on environmental damage. Carbon taxes and the landfill tax are two examples.

In Europe, the Emissions Trading Scheme was implemented in 2005 as a cap and trade system, in which emission allowances were allocated to companies. It now covers 12,000 installations, representing approximately 45% of EU emissions. If emissions exceed authorisations to pollute, allowances can be traded. So far the initiative has not proven successful as carbon prices have plummeted and a tonne of CO2 trades at less than five euros17. In addition, some countries have set their own carbon taxes or carbon price floor. Sweden, which set a price back in 1991, has today the highest carbon price in the world amounting to approximately $160 per tonne. This has contributed to efficient decoupling of GDP growth from emissions. Between 1990 and 2014, GDP grew by 58% while CO2 equivalent emissions were reduced by 23%18.