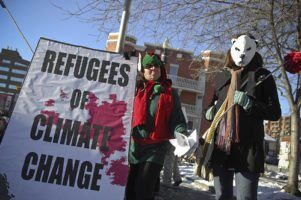 Thousands of people will take to the streets of London today to demonstrate support for the plight of refugees.  Ahead of the UN General Assembly’s high-level summit to discuss the movement of refugees and migrants on Monday in New York, Friends of the Earth is calling on the UN to codify the term ‘climate refugee’ and put it into law.

Doing this would provide legal protection for climate induced migration: people forced to move for safety and survival because of the effects of climate change.
The UN General Assembly has called for a special summit on large movements of refugees and migrants (Monday 19 September 2016 at the UNHQ in New York) as the current response to large scale migration of people fleeing war, persecution, and environmental damage caused by climate change has been woefully inadequate.

Friends of the Earth are critical of governments, including that of the U.K, who are pulling up the drawbridge and refusing to give assistance to millions of people dealing with the impacts of environmental and climate pollution, preferring to label people economic migrants with no legal protection. This is why Friends of the Earth is calling on the UN General Assembly’s meeting on large movements of refugees and migrants to begin discussions on climate change and its increasing role as a driver of migration and displacement of people.

As well as this, the General Assembly should establish a system of legal protection for peoples displaced by climate change, including internally and temporary displacement, as well as those affected by immediate weather impacts, water stress, collapse of agricultural systems, and subsequent economic losses.

“These temperatures are making homes inhospitable, farmland unproductive, it dries up water, and contributes to unrest which all too often results in war. Given dire circumstances people will naturally and obviously move to survive.
“It’s the greatest injustice of climate change, that those who are the least responsible for causing the climate crisis, are the first to suffer and those most responsible are the first to turn their backs.

“Let’s also remember the 3,500 people drowned trying to cross the Mediterranean last year, with nearly 800 drowning in one week in May this year, because legal options for seeking safe haven are no longer available. Something has to change.

“We shouldn’t be timid in demanding a world where solidarity and justice connect us, where all citizens have the right to live a safe and decent life. That means we must also extend protection to those who currently have no legal protection.”

For these reasons Friends of the Earth stands in solidarity with all those marching around the world today to say #RefugeesWelcome. Countries must not only live up to their existing legal and moral obligations to provide legal protection, they must also oppose the racist and xenophobic debate which seeks to demonise migrant and refugee communities.

Friends of the Earth believes that to meet the challenges of climate change and the devastating impact it is having on poorer peoples’ lives, the international community must make sure that the protection agenda includes a commitment to comprehensive human rights, financial support for those in need, as well as recognising the collective rights of communities and people, who face the loss of their territories and states.