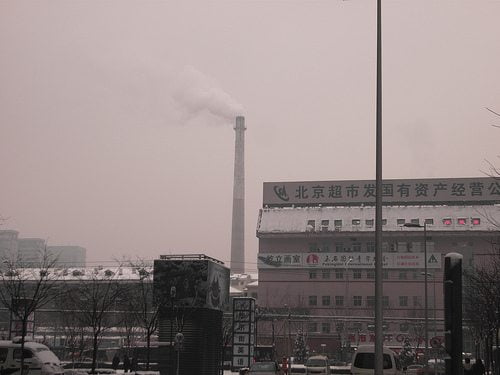 If China is to do its fair share to curb climate change, it must spend an additional 2 trillion yuan (£199 billion) on efforts to cut greenhouse gas emissions and support clean technology, a new report has said.

Research by Beijing’s Central University of Finance and Economics found that the 520 billion yuan (£51 billion) the Chinese government has already pledged to help combat global warming is only a fifth of what is needed if the country is to mitigate its climate impact.

The report, which has been submitted to the Chinese State Council, says the government must take responsibility for raising the extra finance.

“Public funding is essential to address climate change problems, and without a clear signal on CO2 emissions, mitigation projects are not financially attractive to investors”, it says.

The report’s authors suggest the government use carbon markets to auction CO2 permits in order to raise the revenue. They also advise the state-owned China Development Bank to set up a specialised green investment department.

The Chinese government has recently been under heavy pressure to reduce its polluting emissions, not only to limit the damage to the environment but also for the sake of its own people.

Earlier this month, former health minister Chen Zhu said he believed that up to 500,000 premature deaths were caused each year by air pollution in China.

China is currently the world’s biggest carbon emitter, though, if historical carbon emissions are taken into account, the UK has still contributed the most emissions per capita.