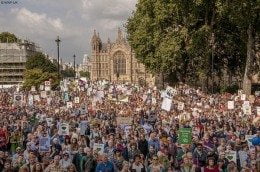 Climate change activists have criticised the need to hire a private firm in order to hold a protest, despite police previously carrying out the role, arguing it means they must “pay to protest”.

According to the Guardian, the organisers of the Time to Act march, have been told that police will no longer facilitate the temporary closure of roads along the route and instead a private firm must be hired at the expense of the organisers.

Speaking to the newspaper, Sam Fairbairn, national secretary of the People’s Assembly, said, “Protest is a fundamental right. This will make it virtually impossible to hold a protest unless you have rich backers.”

Claire James, from the Campaign Against Climate Change, added, “The campaign has organised several marches over the past decade and we’ve always worker with the police and other agencies to ensure they are safe and successful.

“We’ve been told that the police will no longer close roads for protests and we need to hire a private traffic management company, both to draw up a plan for diverting traffic and to provide a team of specialists stewards of the day. Effectively what this means is we have to pay to protest.”

Organisers of the Time to Act march state, “2015 needs to be even bigger. The climate talks in Paris this December are crucial if we’re going to protect all that we love. Our movement is growing, and we’re more diverse and determined than ever before.”

The march aims to bring people together to demand real change and call on politicians seeking elections to consider sustainability. Organisers want the government to invest in renewables and energy efficiency and help a move away from cars and towards public transport.