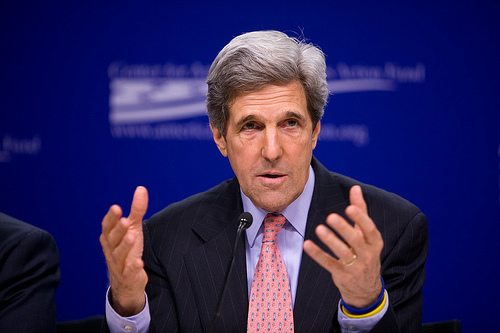 US Secretary of State John Kerry has said that the existence of climate change is undeniable but it is not too late to prevent some of its worst impacts.

“The science is clear. It is irrefutable and it is alarming,” Kerry told a conference of climate experts meeting in Majuro, the capital of the Marshall Islands, in an address from Washington, adding, “I stand with you in the fight against climate change.”

“If we act together, there is still time to prevent some of the worst impacts of climate change,” he said. “But the people of the Pacific Islands know as well as anyone that we also need to prepare communities for the impacts that are already being felt.”

The Marshall Islands, who are hosting a meeting of the Pacific Islands Forum this month, are a group of 29 atolls and coral islands that on average stand only two metres above sea level.

Earlier this year the republic declared a state of emergency after simultaneous experiencing devastating droughts and floods. A freak tide nearly destroyed the capital Majuro, breaching its sea walls and flooding the airport runway.

The Marshall Islands president Christopher Loeak has said, “The Pacific is fighting for its survival. Climate change has already arrived”.

European commissioner for climate action Connie Hedegaard commented, “It is my ambition to make the European Union and the Pacific region partners in advancing the global climate change agenda.

“The Pacific region can count on Europe’s climate cooperation and ambition. We count on the Pacific region to help us bringing all other major economies on board of an ambitious future climate regime to be finalised in 2015.

“There is no time to lose if we want to avoid that devastating climate-driven disasters become the new normal”, she added.

Meanwhile, the European Commission’s humanitarian aid and civil protection department (ECHO) has announced that it will provide €150,000 to people affected by severe droughts in the Marshall Islands, which has left many inhabitants without drinking water.