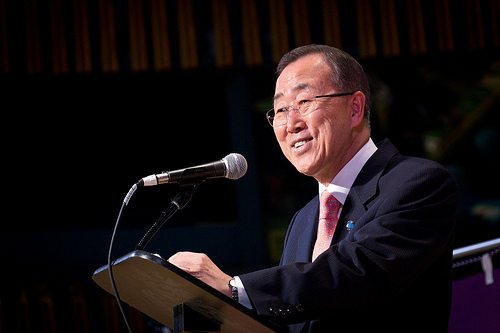 Ban Ki-moon, secretary general of the UN, has said climate change negotiations are going “far too slow” and urged governments, business leaders and communities to work together towards a solution.

The comments come ahead of world leaders meeting in Paris in December to agree on a universal climate change treaty that will aim to limit global warming to 2C.

The UN chief described 2015 as a year of global action, stating an opportunity to “usher in a new era of sustainable development”, adding that the Paris agreement should act as a guide for at least the next 15-20 years.

Recalling comments made earlier to the General Assembly, Ban said, “The negotiation pace is so slow, far too slow. I said it is moving at a snail’s pace.”

Despite this he remains optimistic, adding, “It sees to me that the stars are aligned more than ever before. The governments, business CEOs, civil society, and faith groups, communities, they are all as one now. It is a matter of our political will and diplomatic skill, how to reconverge all the wishes and expectations of the international community in one single universal ambitious agreement in Paris. That is our goal.”

Commenting on conflict in the Middle East, Ban also recognised that climate impacts and development issues, such as water scarcity and poverty, could be playing a part. He said, “Therefore, it is important that the benefits of what we achieve through a climate change agreement will have t help mostly the least developed countries and countries in conflict.”

Several studies have linked climate change to conflict and exacerbating existing tensions. One described climate change as a “catalyst for conflict” that is already having an impact and poses a serious risk.

Ban also commented on the Pope’s climate encyclical, stating it has given “very valuable moral and spiritual strength” to efforts. Earlier this month the Pope warned over the use of resources, climate, poverty and sustainable consumption, calling in people to take action and care for the Earth.