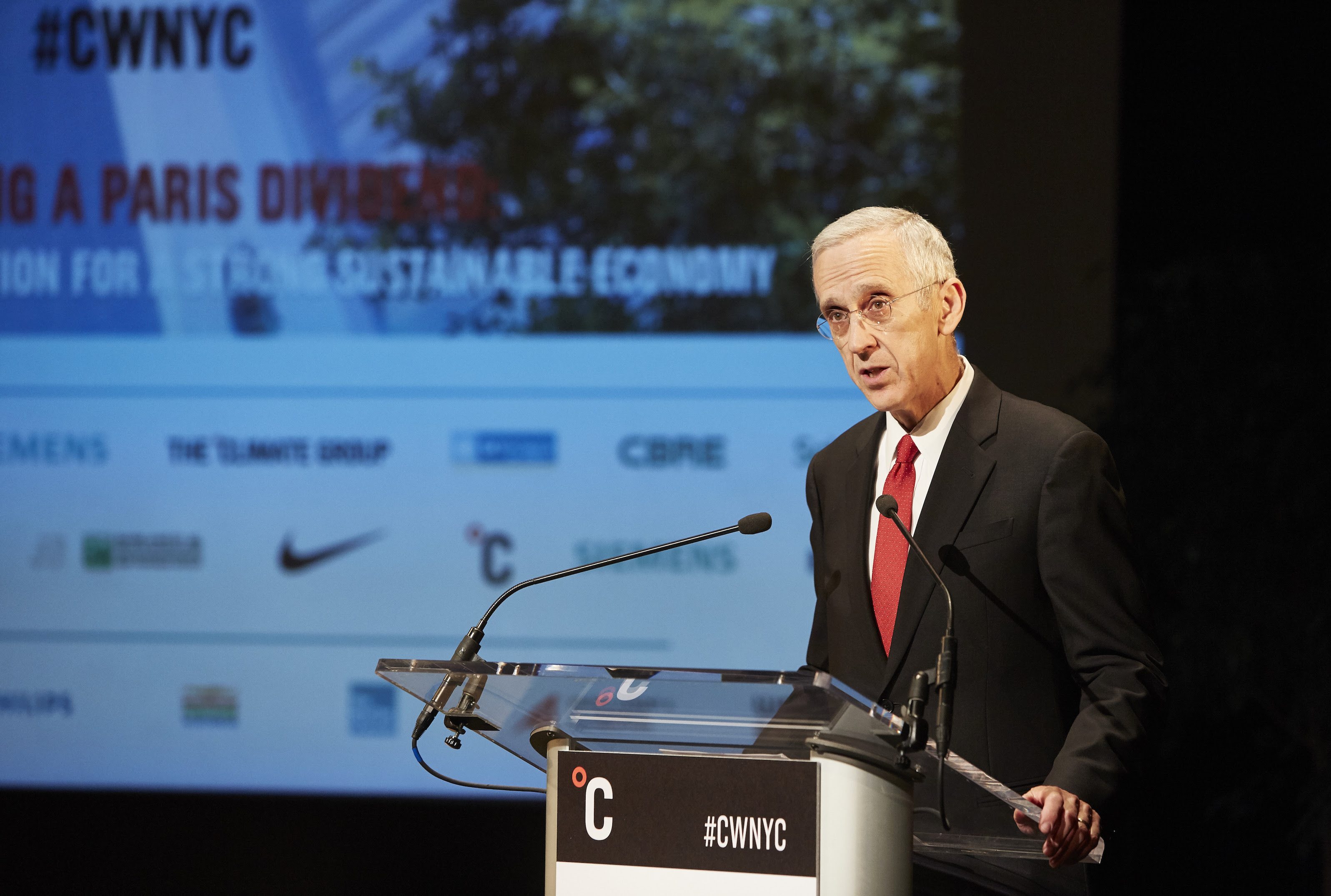 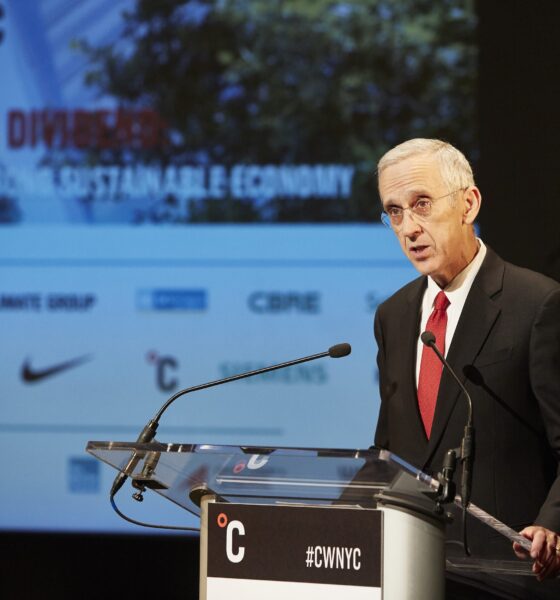 Key global figures who will shape the outcome of December’s United Nations climate conference in Paris later this year came together for the first time at a major event at The French Institute in New York today organised by The Climate Group for the finale of Climate Week NYC 2015.

The leaders agreed to work together to secure a deal and outlined programmes to cut emissions. There was recognition that a successful deal at COP 21 required concerted action by national governments, international institutions, subnational bodies and business. Business and subnational leaders set out a string of major commitments to cut emissions, and called on negotiators in Paris to match their ambition.

Today’s event coincided with a full page advertisement in the Financial Times from organisations working with more than 6 million companies that called for an ambitious climate deal at COP21.

Speaking at the event, Todd Stern – President Obama’s Special Envoy for Climate Change, who recently announced US-China bilateral climate agreements – said: “The stars are more aligned now for an historic universal agreement [in Paris] than they have ever been.

“So let’s work together. Let’s keep our eyes on the prize. And let’s get this done.”

He was joined on stage by Prakash Javadekar, India’s Environment Minister, a key figure in Prime Minister Modi’s government. He confirmed that the Indian Intended Nationally Determined Contribution (INDC) would be released by the end of the week, on the eve of Mahatma Gandhi’s anniversary. He said:

“I believe Paris will be a success. We need to keep it simple. We must ensure annual reviews so there is no backsliding. India is committed to building a green economic future because this will help poverty eradication.”

Laurence Tubiana, the French Government’s Special Ambassador for the 2015 Paris Climate Conference, said at the event: “Paris needs to be a turning point. We’re not there yet but I’ve seen a sea change compared to previous years, particularly with the mobilisation of business, cities and subnational governments. Many world leaders are also now calling for deep decarbonisation, sending positive signals and creating the conditions for success.”

Three time Mayor of New York City, and UN Special Envoy for Cities and Climate, Michael Bloomberg – making a keynote speech at the event – announced plans for city-level mayors to come together with other leaders of states and regions to agree a ‘Compact of Compacts’ demonstrating leadership at the subnational level to build low carbon economies. This came on the back of an announcement by subnational leaders that set out carbon reduction targets of 7.9 GtCO2e by 2030, more than the US’ annual emissions.

Speaking at the event, Mr Bloomberg said: “Cities, states and regions have considerable leeway to act on their own without the need for national government support. Today I am announcing a formal alliance between the Compact of Mayors and the Compact of States and Regions initiatives. No one should doubt the collective clout of subnational government. We need to change the rules that prevent them from investing in smart infrastructure.”

Also speaking at the event were major business leaders from Fortune 500 listed companies who announced plans to switch to 100% renewable energy and adopt science-based carbon targets.

Maria Fernanda Mejia, President, Kellogg, Latin America said: “At Kellogg, we have had a longstanding commitment to responsibly source our ingredients and conserve natural resources in a manner that will produce more food, strengthen the communities in which we operate, and help support the livelihoods of the farmers who grow our ingredients. That is why we continue our commitments to remove commodity-driven deforestation across our entire supply chain and are setting further emission-reduction targets. It’s good for people, our company and the economy. We’re proud to be part of the We Mean Business campaign as a way to partner with leading companies to hasten the transition to a low-carbon world.”

In a statement to the event, read by John A Kufour the UN Secretary-General’s Special Envoy on Climate Change, Ban Ki Moon stressed the importance of everyone working together to find a solution. He said: “We need all hands on deck at this critical point in history.”

Christiana Figueres, Executive Secretary of the UN Framework Convention on Climate Change (UNFCCC), said: “The extraordinary wealth and welter of climate action announced by governments, cities, investors and companies during Climate Week 2015 has been truly breathtaking. Underpinned by the moral imperative of His Holiness Pope Francis and the successful conclusion of a suite of Sustainable Development Goals, confidence is building towards Paris and a new universal climate agreement.”

The OECD’s Secretary General Angel Gurria also spoke at the event on the need for a new economic paradigm: “It’s time for a climate reality check: subsidising fossil fuels does not pass the test. Coal remains the least taxed of all fossil fuels despite being the dirtiest fuel available for electricity generation.”

President of the World Bank, Dr Jim Kim reiterated the collaboration that was needed to combat climate change. He said: “The Paris climate change conference must demonstrate our collective commitment to getting the world on a path to zero carbon. Solving the challenges of climate change requires both public and private sector leadership. ”

Organised by The Climate Group each year, Climate Week NYC has become an increasingly important event for politicians and corporations to agree on joint action and push for greater ambition in international climate negotiations.

Mark Kenber, CEO of The Climate Group – the international non-profit behind Climate Week NYC – said: “This year’s Climate Week NYC has brought together key figures from all the sectors needed to secure a deal which averts runaway climate change, and also those who will actually drive emissions down in the short term. State and regional governments announced ambitious climate targets equivalent to the US’ emissions, and some of the world’s biggest corporations have now pledged to use 100% renewable energy.

“The wind is in our sails. A deal in Paris is now highly likely, and – judging from the commitment of key businesses and major economic regions – we may also be on the cusp of a major transition to a prosperous, low carbon economy.”

Nigel Topping, CEO of We Mean Business – a coalition of pro-climate business groups – added: “We welcome the commitments to climate action made by Walmart and Kellogg today, and the leadership being shown by New York State Comptroller DiNapoli – one of America’s most influential investor voices. Organizations working with more than more than 6 million companies are calling for ambitious climate policy in Paris at COP21.”

Niall Dunne, Chief Sustainability Officer, BT said: “Innovation has been at the heart of BT for nearly 170 years. We know communications technology has a crucial role to play to deliver the innovation and collaboration that are essential to combat climate change as well as delivering sustainable growth. ICT is a vital tool for better business and a better world.”

Len Sauers, Vice President, Global Sustainability at Procter & Gamble, who joined the RE100 campaign this week, said: “Achieving 30% renewable energy by 2020 is what we feel is needed to keep us on track so we can one day realize our long-term vision of being powered by 100% renewable energy. Joining RE100 allows us to work with like-minded companies to scale and advance efforts.”

Climate Week NYC is a key event in the international calendar that brings together leading governments, investors, businesses, innovators and opinion formers. The Climate Group launched Climate Week NYC in 2009, and has acted as the secretariat since its inception. Host to more than 100 affiliate events from September 21-28, Climate Week NYC 2015 is the collaborative space for climate events in support of the UN Summit to adopt the Post-2015 Development Agenda.