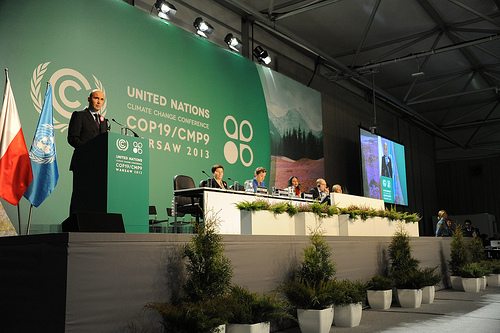 China will commit to tougher carbon reduction targets in its next five-year plan, due in 2015, but nearby Japan is expected to lower its own objectives, according to reports from the UN climate talks in Warsaw.

The Japanese government is expected to adjust its targets to commit to an emission reduction of 3.8% from 2005 levels.

However, the country’s emissions rose by around 7% between 1990 and 2005, meaning that achieving the new target would actually represent a rise of 3.1% from 1990. Under the Kyoto Protocol, Japan had initially pledged to reduce its emissions by 6% from 1990 levels.

In a statement, UK energy secretary Ed Davey said the Japanese government’s decision was “deeply disappointing”, and urged it to reconsider.

“As the world’s third largest economy, Japan needs to be at the forefront of taking ambitious action”, Davey said.

Naoyuki Kamagishi, climate and energy group leader at WWF Japan, said that his organisation condemned the move. He complained that the point of the negotiations in Warsaw were to raise targets.

“Now we see Japan is going to lower its ambition, in the complete opposite direction, so we have to change our government’s mind”, he said.

Meanwhile, China – the world’s largest emitter of carbon dioxide – will attempt to build on its ambitious targets after 2015, the country’s deputy head of climate change has told RTCC.

Li Gao said the country would “make every effort” to meet current targets of a reduction in the “intensity” of emissions by 40-45% on 2005 levels by 2020.

“We will make efforts to reach a higher end. And at the same time, to deal with CO2 emissions, we are thinking about maybe carbon intensity target as well as overall control.”

According to a report published in October, China’s emissions increased by 3% in 2012. However, this represented a significant reduction from the average annual increases of around 10% in preceding years.

A report released on Thursday to coincide with the talks, compiled by the thinktank Germanwatch, also found that the EU was no longer the world leader in climate policies. It found that some countries, including China, had overtaken the EU with the ambition of their legislative efforts to curb climate change.