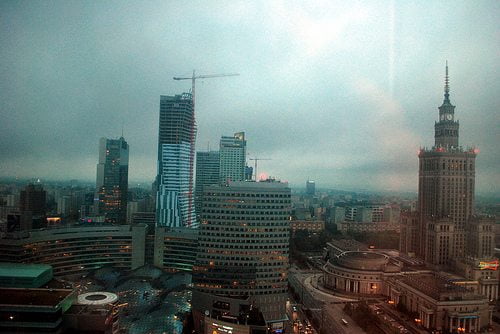 As delegates from around the world begin crucial climate talks in Warsaw, a new report has warned of the influence of fossil fuel lobbyists on the negotiations.

The 19th session of the Conference of the Parties (COP19) to the United Nations Framework Convention on Climate Change (UNFCCC) will run from November 11-22 in the Polish capital’s national stadium.

In 2011, UN members pledged to agree on a binding strategy to tackle global warming by 2015. Taking effect in 2020, the pact would commit all nations to targets for reducing greenhouse gas emissions.

With only 50 days of negotiation left until the agreement must be signed in Paris, many of the details and mechanisms of this strategy remain undecided.  Politicians and environmentalists have stressed the necessity of progress in Warsaw.

However, a report by the Corporate Europe Observatory (CEO) and the Transnational Institute (TNI) claims that the Polish government has formed a partnership with 11 corporations and anti-climate lobbyists, almost all of which have histories of blocking climate change regulations, providing them with inside access to the talks.

“If your house was being attacked by gunmen, would you give them keys to the house? Yet the Polish government and the UN have given inside access to the very corporate criminals responsible for the climate crisis we now face”, said Lyda Forero of the Transnational Institute.

“The Polish presidency of COP19 has officially affiliated the climate talks with a selection of the biggest climate crooks in history – from fossil fuel giants and car companies to aviation and heavy industry”, the report says.

The Polish government had earlier said that these companies would help in organising the conference, adding, “The products and services they offer are green.”

The report rejects this claim, saying, “These partners have terrible climate records and vociferous histories of lobbying against climate-friendly policies.

“In return for their ‘support’, these corporations get to call themselves partners, enjoy privileged access to the conference and of course, exploit a great greenwashing opportunity.”

Host nation Poland has also come in for condemnation because of the ministry of economy’s decision to host an International Coal and Climate conference running concurrently with COP19.

“Sadly, Poland has never been a champion of strong action on climate change, and the UN conference may have to make progress despite, rather than because of, their hosts”, said Richard Dixon, director at Friends of the Earth Scotland.

However, Marcin Korolec, Poland’s minister for the environment and the president of COP19, argued that his country is a worthy host, and said it will ensure “democratic and transparent” negotiations.

“The statement that the fate of our planet lies in our hands, in relation to the negotiations of a climate agreement, certainly is not an empty truism”, he added.