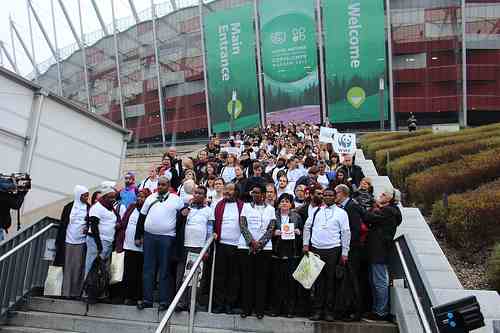 The UN Environment Programme’s director has called on the private sector and civil society to join forces in the name of sustainability, as climate change negotiations in Warsaw enter their final day.

Speaking at the Sustainable Innovation Forum, where more than 500 delegates had gathered to discuss low-carbon economic opportunities, Achim Steiner said collaboration was key as the world looked to limit the global average temperature increase to below 2C.

“Climate action has to be centered on promoting effective partnerships between the public and private sector by helping to create dialogue and knowledge transfer between corporates, international governments and NGOs, with the acceleration of the inclusive green economy the ultimate aim”, he added.

UNEP also presented a report on Thursday about the underestimated danger of nitrous oxide (N2O), a powerful greenhouse gas coming from agriculture, industry and coal plants, which is contributing to thin the ozone layer.

The study says that tackle N2O emissions would help to improve agricultural yields and save $23 billion (£14 billion) in fertiliser costs. According to UNEP, reducing the amount of NO2 in the atmosphere is crucial to keep the global warming under the 2C threshold.

“UNEP’s role is to draw the attention of this conference to the science so that politicians can act”, Steiner said.

“Although this is known as laughing gas, it is far from a laughing matter as far as its effect on the ozone layer and the climate is concerned. It has a disproportionate impact on global warming because of its warming properties and long lifetime in the atmosphere.”

Meanwhile, NGOs – including some that were participating to the negotiations – and members of the civil society have taken the streets of Warsaw, protesting against what they say has been limited progress at the Polish summit. They said that the weeks of negotiations had achieved “virtually nothing”.