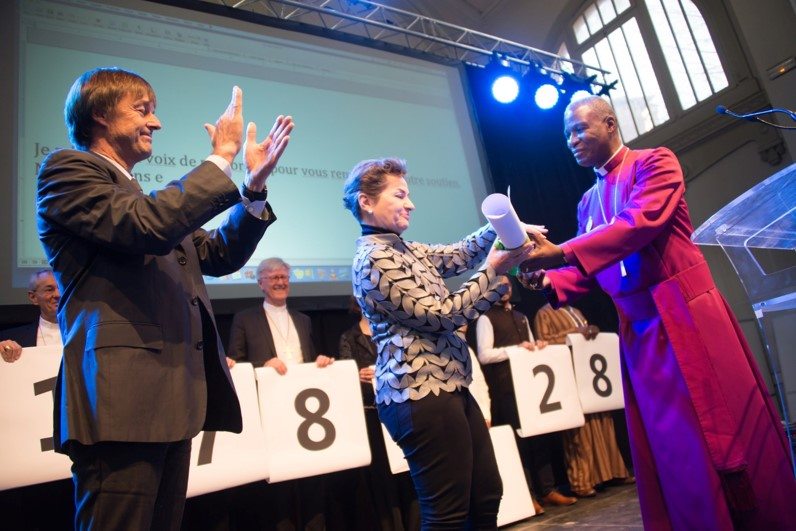 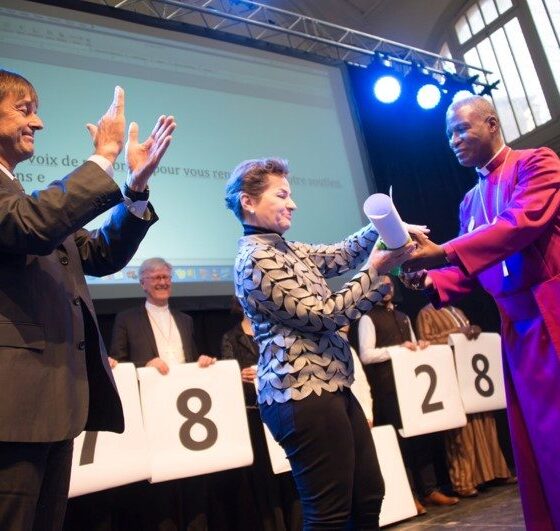 The petitions were presented to UNFCCC Chief of Staff Daniele Violetti and Special Envoy of the French President for the Protection of the Planet, Nicolas Hulot, on November 28 at the ‘Faith in Climate Justice’ (‘Les Religions Pour le Climat’) event at Salle de la Légion d’Honneur in Saint-Denis.

The hand-in was witnessed by close to 400 people, including faith leaders, COP21 delegates and climate campaigners from around the world – including individuals from countries such as Germany, the UK, Philippines, Italy and Scandinavia who have walked hundreds of kilometres in a ‘pilgrimage to Paris’.

Several key individuals spoke at the event: from the Philippines, former COP negotiator Yeb Sano; from Brazil, Cardinal Claudio Hummes; from South Africa,Archbishop of Cape Town the Rt Rev Thabo Makgoba; from the US, the Rev Kyoichi Sugino of Religions for Peace International; from Kenya, Mithika Mwenda, Coordinator of the Pan African Climate Justice Alliance; and from Bangladesh, Lotifa Begum of Islamic Relief Worldwide.

‘Faith in Climate Justice’ was organized by four international faith-based networks working together for a common cause: ACT Now for Climate Justice (part of ACT Alliance), OurVoices, Religions for Peace and the Global Catholic Climate Movement.

OneVoices climate ambassador Yeb Sano, who has walked 1,500km from Rome to Paris as leader of the People’s Pilgrimage, said: “The pilgrimages represent, in a political way, that the time for talking is long over. Irrespective of what our leaders produce from Paris, across the globe we are working as communities and cities, as faith groups and organisations, and as pilgrims, walking together out of love, faith and hope that we can build a better future together.”

Archbishop Thabo, global climate ambassador for ACT Alliance, said: “People of faith urge all parties to constructively engage and agree on a Paris deal applicable to all. Climate justice is a spiritual and moral issue. To call it ambitious, it must include the long-term goal of climate resilient decarbonisation by mid-century and a periodic review and ratchet up mechanism to increase ambition dynamically. To call it fair, it must provide robust transparency rules, a firm commitment to deliver the $100bn climate finance to the poor, and the anchoring of the Warsaw International Mechanism on loss and damage in the Paris agreement.”

On behalf of the Global Catholic Climate Movement, Cardinal Cláudio Hummes, Archbishop Emeritus of Sao Paulo (Brazil) and former Prefect of the Congregation for the Clergy, said: “2015 has been a very special year for the Catholic Church and its response to the climate crisis, crystallized in the Pope’s Laudato Si’ encyclical, the Bishops’ ‘Appeal to COP21’, and the grassroots mobilization of the Global Catholic Climate Movement this weekend, which brought hundreds of thousands of petition signatures to Paris and will join the Global Climate March in all continents. I pray for political leaders to ‘hear both the cry of the earth and the cry of the poor’ and respond to the climate justice demand from all faiths.”

Secretary General for Religions for Peace International, Dr William F Vendley, said: “Meeting the challenge of climate change will help transform us into who we are called to be:  one human family living in community with the earth and the Divine.”

The 1,780,528 people who signed the petitions include individuals in both the global north and the global south. They were mobilized by, among others: thePan-African Climate Justice Alliance (in partnership with Oxfam Africa), the Church of England, Tearfund, Christian Aid, Islamic Relief, National Religious Partnership for the Environment, and Interfaith Power and Light – together with the four organizing networks previously mentioned.

As well as live music and visual presentations, the audience at the ‘Faith in Climate Justice’ event heard speeches from the Bishop of Saint Denis, Pascal Delannoy; the President of French Conference of Faiths in France, François Clavairoly; and the President of Plaine Commune, Patrick Braouzec.