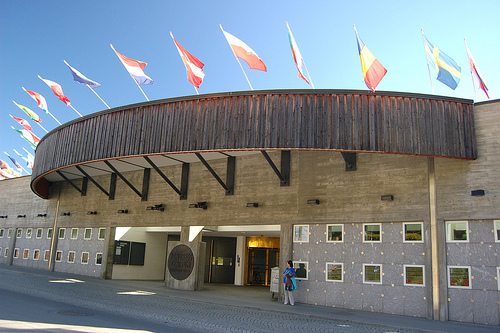 Climate campaigners have urged the elite individuals attending the World Economic Forum in Davos to recognise “the reality of the carbon bubble” and commit to divestment from fossil fuels.

Activists from the international 350.org campaign group say it is time for financial leaders in particular to realise the risks and unsustainability of their fossil fuel investments.

“Governments, businesses, and a civil society have all come under pressure to take steps to address climate change. Up until now, the financial community has largely been left off the hook. That needs to change”, said Jamie Henn, strategy director at 350.org.

The idea of a carbon bubble refers to the theory that as governments decarbonise their economies and cut emissions to limit global warming, the fossil fuel industry’s coal, oil and gas reserves will need to remain unburned.

This means they will become financially worthless “stranded assets”, creating a large financial risk for the companies that own them and those with stakes in them.

Scientists estimate that no more than around 565 gigatonnes of carbon can be emitted if the universal target of limiting warming to 2C is to be achieved.

Fossil fuel companies currently have enough fuels to emit 2795 gigatonnes of carbon dioxide in their reserves, and are always looking for more. Companies across the world spent over $650 billion (£441 billion) last year trying to find new fossil fuel reserves.

350.org urges attendees in Davos to take the opportunity to discuss divestment from the fossil fuel industry – and investing instead in renewable alternatives – with their peers.

“I think 2014 is the year that the discussion about a carbon bubble will go mainstream”, Henn added.

“The fossil fuel divestment movement is spreading like wildfire at universities and in cities around the world. The financial community cannot continue to ignore its role in fuelling the climate crisis.”

In October, an alliance of 70 major investors with a collective $3 trillion (£1.85 trillion) of assets called on the world’s largest fossil fuels firms to rethink their approach to avoid the risks of a carbon bubble.

Meanwhile in November, former US vice-president Al Gore said that energy companies were repeating the mistakes that led to the financial crisis.

While stressing “we need renewables”, Cameron said, “We also need to explore the opportunities presented by shale gas.”

“We should be clear if the European Union, or its member states, impose burdensome, unjustifiable, premature regulation on shale exploration in Europe, investors will head elsewhere,” he warned.

Cameron also claimed, “If this is done properly, shale gas can actually have lower emissions than imported gas.”

Speaking at the forum yesterday, World Bank president Jim Yong Kim told financial leaders, ”This is the year to take action on climate change. There are no excuses.”