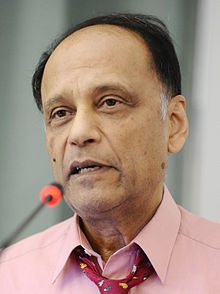 The Executive Committee of The Tyler Prize for Environmental Achievement today announced the selection of Sir Partha S. Dasgupta, PhD, as the 2016 Tyler Prize Laureate. He is recognized for developing economic theory and tools to measure the relationships between human and environmental well-being, poverty, population, economic growth and the state of natural resources. Dasgupta is the Frank Ramsey Professor Emeritus of Economics at the University of Cambridge.

“From co-chairing the committee that advised Pope Francis on the scientific basis of climate change to helping shape the Sustainable Development Goals, Sir Partha’s work has ensured that we keep in mind both people and the way we use our natural resources to benefit present and future generations,” added Marton-Lefèvre.

Dasgupta’s work challenges the conventional thinking on how nations measure their well-being and places an emphasis on population and environmental sustainability.

“We have long measured the progress of nations in terms of what they produce and consume as expressed in the gross domestic product (GDP),” said Dasgupta. “We need to be working with an entirely different measure. GDP doesn’t tell us if we are growing in a way that benefits all in society, including future people; it ignores factors like inequity and whether we are using our natural resources in a way that can also benefit future generations.”

Since its inception in 1973 as one of the world’s first international environmental awards, the Tyler Prize has been the premier award for environmental science, environmental health and energy.

“Sir Partha’s work to create a framework for sustainable development and his commitment to addressing poverty and the environment have made him unsurpassed among environmental economists in the world,” said Simon Levin, the 2014 Tyler Prize Laureate.

As the winner of the Tyler Prize, Dasgupta will receive a $200,000 cash prize and a gold medallion and join the ranks of Laureates that include Edward O. Wilson, Jane Goodall, Jared Diamond, Paul and Anne Ehrlich, M.S. Swaminathan, Thomas Lovejoy, Jane Lubchenco and Madhav Gadgil. A full list of past winners is available at www.tylerprize.usc.edu/pastlaureates.html. The Prize, awarded by the international Tyler Prize Executive Committee with the administrative support of the University of Southern California, honors exceptional foresight and dedication in the environmental sciences and policy—qualities that mirror the prescience of the Prize’s founders, John and Alice Tyler, who established it while the environmental debate was still in its infancy.

Chasing Questions in Economics: From the Streets of Calcutta to the Vatican

“I didn’t have a big vision or an agenda when I started my career,” says Dasgupta. “This has been a 40-year chase in which I started with narrow problems and then found that I needed to understand them in a larger context.”

For Dasgupta, one part of this chase began while walking the streets of Calcutta to see his parents. “I saw women begging and some had children with them. It was part of life,” explained Dasgupta. “On one occasion I saw a baby about a year old lying next to her mother with flies on her face. It was a moving sight, but I began wondering why she wasn’t swatting the flies away.”

Thinking about how this girl was using—or not using—very limited energy led Dasgupta to explore broader questions on the relationship between nutrition and health and what they meant for human productivity. These interests expanded quickly to the use of and value placed on natural resources, population, and sustainability.

Forty years later, Dasgupta is recognized as a leading global expert for his work studying economic and environmental issues and incorporating other disciplines. Notably, Dasgupta co-chaired the joint report for the Pontifical Academy of Sciences and the Pontifical Academy of Social Sciences—entitled Climate Change and The Common Good—which served as the scientific basis for Pope Francis’ call to action on climate change, the encyclical on the environment (Laudato si’).

Rethinking a Nation’s Ledger: Challenging Our Understanding of Wealth and Economic Growth

Dasgupta’s work across economic questions led him to recognize that a more comprehensive and complex measure of national and economic well-being is necessary to help governments craft better economic and development policies.

“Judging the wealth and health of countries using GDP captures just a moment in time and not where the country is headed. It’s like judging the current and future prospects of a household by only noting its annual expenditure on goods and services and not enquiring whether that expenditure was drawing down the household wealth,” explained Dasgupta.

Instead, Dasgupta and colleagues advocate that nations should measure their “inclusive wealth,” which includes not only the value of a country’s infrastructure and tools for production—such as roads, buildings and factories—and education and health of its citizens (human capital), but also the value of natural capital (environmental health, ecosystems, sub-soil resources). Inclusive wealth measures a nation’s potential productivity.

Dasgupta and his colleague Karl-Goran Maler showed that future generations will have a higher quality of life if an economy’s inclusive wealth grows at a faster rate than its population. “It’s no good talking about sustainable development without moving to a system that incorporates inclusive wealth,” said Dasgupta.

Dasgupta serves as the Scientific Advisor to the Inclusive Wealth Project, a UN-sponsored initiative that seeks to measure the wealth and long-term sustainability of countries. This approach, he argues, must be put to work in global discussions around sustainability, including the recently agreed upon UN Sustainable Development Goals (SDGs).

“We can’t trick ourselves into thinking that reaching the SDGs benchmarks—such as no poverty or no hunger—is success alone. We have to reach them through smart development policies or that success will be fleeting,” said Dasgupta. “We’ll only know if we’ve done that by asking whether the development policies that will be adopted to meet the SDGs will raise inclusive wealth at a faster pace than the population grows.”

Over the course of Dasgupta’s career, he has collaborated with experts from many other disciplines, including ecologists, epidemiologists and anthropologists. While Chair of the Board of the Beijer Institute, Dasgupta and colleagues brought together economists and ecologists from around the world to address problems of environmental stewardship and helping the world’s most disadvantaged people.

“Sir Partha had the intellectual leadership to help bring together partners that had never worked together in this way,” said Levin.

In 2013, Dasgupta chaired a diverse expert committee for India’s Prime Minister Manmohan Singh, which constructed a framework for measuring India’s national well-being that incorporates not only economic output, but also the health and value of environmental and natural resources.

“Doing economics is like peeling an onion. ‘Why’ is a persistent question,” said Dasgupta. “The problem, as well as the attraction, for me has always been that at each stage I discovered that I needed other disciplines to help me answer the questions.”

Dasgupta’s efforts to engage diverse perspectives extend to regional views as well. He co-founded the South Asian Network for Development and Environmental Economics (SANDEE) to elevate the work of scholars from developing countries, and launched the journal Environment and Development Economics, which publishes research on poverty and environmental resources by scholars in poor countries.

“In the developed world the environment is often thought of as an amenity—is the beach polluted or is the national park a place I want to go on vacation—but most of humanity does not enjoy the environment solely as an amenity,” explained Dasgupta. “People in poorer countries understand this complexity, but their voices aren’t heard enough.”