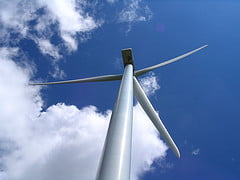 Bloomberg New Energy Finance has predicted that by 2020, energy storage use could be “widespread”. But what will this mean for the renewables industry? And more importantly, is it already here? Alex Blackburne finds out.

In debates about renewable energy productivity and usage, one question from naysayers – “what happens when it isn’t sunny or windy?”, and variations thereof – has the potential to trip clean energy advocates up. But is this justified?

Bloomberg New Energy Finance has predicted that by 2020, energy storage use could be “widespread”. But what will this mean for the renewables industry? And more importantly, is it already here? Alex Blackburne finds out.

In debates about renewable energy productivity and usage, one question from naysayers – “what happens when it isn’t sunny or windy?”, and variations thereof – has the potential to trip clean energy advocates up. But is this justified?

This has the potential revolutionise the renewables industry, and the subsequent perception of it.

BNEF cite the “expected drop in battery prices” as the main driver behind its predictions, claiming that, “More substantial penetration of energy storage within the grid system will become economic within the next five years”.

An appropriate regulatory framework would need to be installed in order to achieve a “successful roll-out of energy storage”.

But, despite welcoming the report, Anthony Price, director of the Electricity Storage Network, is puzzled about BNEF’s predictions.

“We might have to wait a couple of years in order for people to develop large projects, but if there was will, there is no reason why we couldn’t see several projects of 100MW in size being completed in the next few years.

“Storage projects can be very fast to build.”

BNEF’s line of study concludes that energy storage will be “economically viable” by 2016. Shu Sun, energy storage analyst at the organisation, explained what it means by this.

“The main reason for this is that the use of storage for transmission, distribution and end-use is still at an early stage.

“The financial benefits are not yet clear and the cost of these new technologies that can provide these transmission, distribution and end-use functions is still high.”

The report hasn’t been, and isn’t going to be, released to the press. Are BNEF simply sitting on the fence then, releasing information that is both ignorant of the reality and inaccurate from the facts?

“People can come up and say that over the next five or ten years, there will be further cost reductions [to energy storage], but that’s not the issue”, he claims.

“The technologies are there, and they can be delivered now.

“There is a choice: environment or economics. We need to use energy storage charged up from wrong time supplies of renewable energy instead of relying on fossil-fired power stations to provide back-up frequency response and other reserves.”

Price points towards the Dinorwig and Ffestiniog Power Stations in North Wales – the first major pumped storage system in the UK.

“We’ve already got pumped storage, and it is being used, so there is an education process needed to show what storage is and what it does on the network”, Price explained.

“The reason that storage is required is to assist with balancing the network over short and long time-frames. Advanced storage technologies will make a real difference here.

“We’ve already got some long-term storage, but not enough to deal with the potential for increased production.

“We’re seeing projects already being installed for short-term storage – we just need more of them.”

In the UK, companies such as Highview Power, with its cryogenic electricity storage, have won awards for its novel technology, installed on a power station in Slough, whilst ABB has installed battery storage in Norfolk to deal with local wind fluctuations.

Sun agreed that energy storage certainly wasn’t an unknown entity, but it wasn’t cost-effective to become marketable at present.

“There are already large-scale projects out there in [places] such as Japan, US and China”, he said.

“Some of these are government-backed demonstration projects, some are purely commercial.

“Our analysis shows that for most applications, the financial value gained is still lower than the cost of storage, which means that commercial projects will therefore not be widespread before 2016.”

Last year, a group from Stanford University claimed to have struck gold when they touched upon “a high-power battery electrode that is so inexpensive to make, so efficient and so durable that it could be used to build batteries big enough for economical large-scale energy storage on the electrical grid“.

Although encouraging, the researchers’ project still needed more work, and an extra battery according to New Energy and Fuel.

For renewable energy, reaching a stage whereby power can be stored for days when it isn’t windy or sunny is hugely important.

What is for sure is that these technologies and energy generation methods will continue to grow thanks to investments made by people like you. Yes, you.

Ask your financial adviser about putting your money into places that really will benefit the world. Imagine being able to say that.

You can also fill in our online form and we’ll connect you to a specialist ethical adviser.