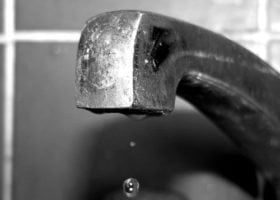 Could a Flint, Michigan-Style Water Crisis Happen in Canada?

The short answer is, yes. When it comes to aging infrastructure, mismanagement, and lack of resources, anything and everything can happen. The crisis that caused so many to wonder how the world’s wealthiest country could be afflicted by such a seemingly foreseeable and preventable chain of events can certainly happen anywhere – Canada included.

What Happened in Flint?

In April 2014, the city of Flint began drawing water from the nearby Flint River as a temporary measure to assuage residents concerned with water quality as the municipality transitioned between suppliers. The water, which the city decided to draw untreated from the river, immediately began to corrode the pipes, leaching lead into the supply.

In October of that year, General Motors announced that it would not use water drawn from the river, citing concerns that the water’s elevated chlorine levels might corrode and damage their equipment.

Fast forward to February 2015. After months of resident complaints, a water test conducted in a resident’s home found that the water the family was using on a daily basis had a lead count of 104 ppb (parts per billion). To give this figure some context, the Environment Protection Agency (EPA)’s maximum limit for the amount of lead that should be present in water destined for human consumption is only 15 ppb. It bears repeating that consuming lead is incredibly dangerous and can lead to a host of medical problems, particularly in children.

Months of controversy ensued, some of which included statements by city and government that claimed the water was in fact safe to drink, insisting tests showing elevated lead counts could be dismissed as outlying situations that did not represent the norm. Since then, subsequent third party analysis has continued to conclude that an excessive amount of lead is present in Flint’s drinking water. Ultimately the lack of admission and conflicting statements only served to muddy the waters.

The State of Water in Canada

Canada may be known the world over for it’s pristine rivers, lakes, and wetlands, but that doesn’t mean that we’re completely safe from our own Flint-like water scare. In fact, the Canadian Water Network estimates that upwards of 60,000 homes across the country may still be hooked up to their city’s water supply via lead service lines.

Thankfully, municipalities all over the country have recognized the risk and have taken steps to mitigate the public’s exposure to leached lead in their drinking water. In addition to replacing aging lead pipes on city property, using new pipeline condition assessment technology. Furthermore, cities can also take advantage in innovations in water treatment technology, investing in state of the art municipal water treatment systems to keep their water clean.

At greatest risk are buildings and infrastructure built before 1950 as lead pipes were a staple of construction projects prior to that year. Owners of buildings and homes built after 1990 are drastically less likely to contain materials capable of poisoning inhabitants.

Sometimes, lessons concerning public safety are learned the hard way. Canada may be in decent shape now, but we too once suffered through our own water crisis.

In 2000, residents of Walkerton, Ontario, were exposed to an E. coli contaminated water supply, which resulted in the death of 7 residents, with thousands more becoming incredibly ill. The shocking tragedy prompted a province wide review of 659 water treatment facilities, which concluded that 57% of them were not complying with provincial regulations and standards.

Shocking as it was, these findings did inspire other provinces to examine their own practices and paved the way for Ontario to abandon its voluntary compliance standards in favour of legally enforceable obligations.

Canada’s water system is far from flawless, and perhaps it will never be perfect. Events like those that have taken place in Walkerton and Flint, while tragic, do help to identify glaring issues with the way we provide public services; issues that perhaps would never have come to light had tragedy not struck. Is Canada safe from a Flint-like crisis or a repeat of Walkerton’s E. coli outbreak? – Perhaps not completely. Knowledge however, is power – one hopes that, knowing the danger, a large-scale crisis is a lot less likely to occur.